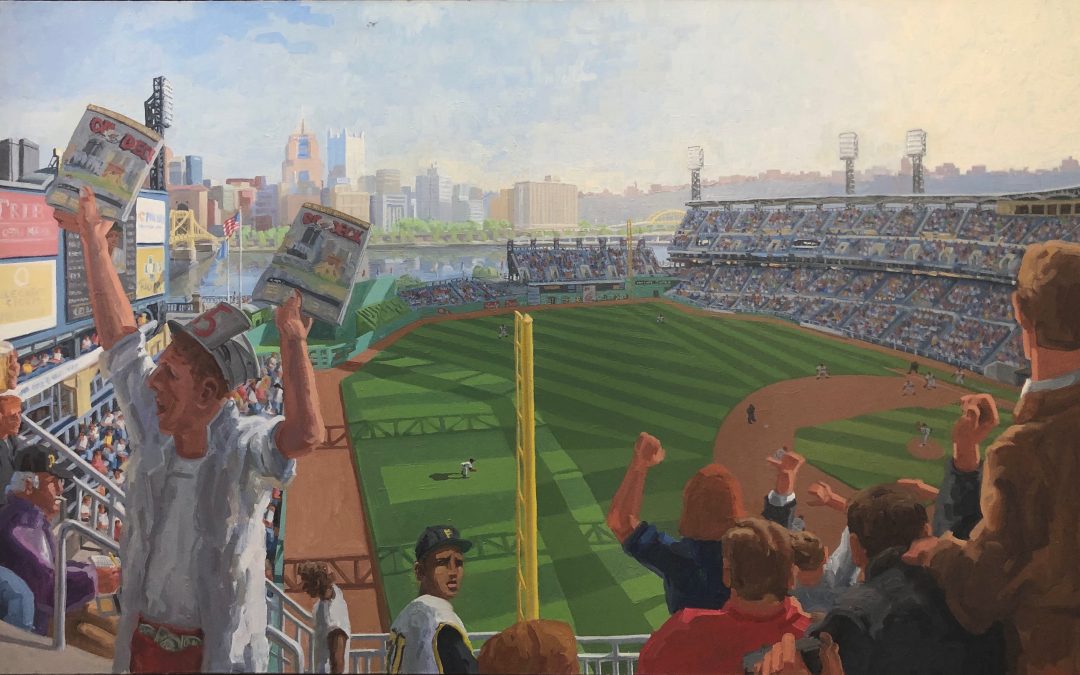 TV moved into our suburban Boston home in the summer of 1960 when I was 7 years old. Early that fall I ran home from the bus stop to catch what was left of each World Series game. 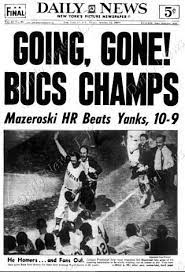 The Yankees were the Red Sox nemesis and my best friends’ father was from Pittsburgh so of course I rooted for the Pirates. It was a fabulous shock and surprise when Bill Mazeroski hit the Series winning home run in the 9th inning of game 7. Little did I realize the momentous nature of that experience. Television had enabled me to witness an iconic moment in baseball history, the first to be seen by people around the country as it happened, which made it all that much more momentous. Thus began the ascendancy of televised sport in American culture.

In 1960 all baseball stadiums were full of quirks, located in the dense urban fabric of their cities, and filled with the history of baseball from the turn of the century. That was what made them, and the game that was played in them, so much a part of the American imagination. Pittsburgh’s Forbes Field was one of the best.

After 1960 the Pittsburgh Pirates faded into the background of my sports consciousness, and the intimate stadiums of my youth started being replaced with concrete bowls surrounded by acres of (not free) parking. Forbes Field was followed by the symetrical 3 Rivers Stadium. It came and went without my experiencing it, or caring for that matter. The “We Are Family” Pirate’s of Willie Stargell and Dock Ellis in the 70’s were, quite frankly, a little scary for my New England bred preppie blood. The emergence of Roberto Celemente as the games first great latino star, and his tragic death a few weeks after achieving one of baseballs most difficult and cherished milestones, 3000 hits in 1972, is about the only thing Pirate related that that interested me until PNC Park was opened in 2001. That, however, was then, and the Pirates of PNC Park are now. Of all the new ballparks, PNC, like it’s predecessor Forbes Field, is a gem. It sits hard on the banks of the Allegheny River with downtown Pittsburgh just a short walk across the Roberto Clemente Bridge. It, along with AT+T Park in San Francisco allows for the possibility of a long homer to right field to be gathered in by an eager kayaker situated in the river waiting for exactly that.

It’s hardly surprising that the architects of PNC passed over 3 Rivers Stadium for design references. Even though 3 Rivers was sited at essentially the same place, it did everything to ignore the presence of the river and it’s proximity to downtown. It is understandable, if not to our current taste, that the owners and designers wanted to ignore the city and it’s rivers. Pittsburgh was most famous for it’s heavy industry and the pollution that attended it’s manufacturing, both air and water. In fact the charm and drama of one the most dramatic and spectacular photographs of Forbes Field, 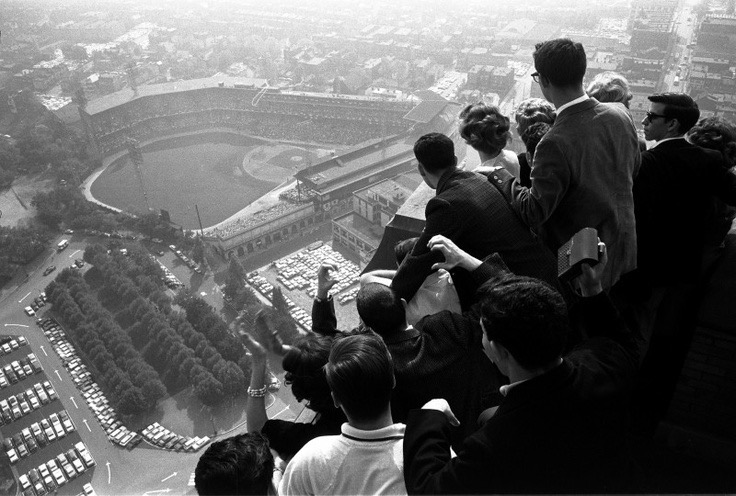 if not the entire history of stadium photography, is at least partly due to the famous smoke and smog of Pittsburgh. It is taken from the top of The Cathedral of Learning, the centerpiece of the University of Pittsburgh’s main campus which, fortunately for us, looked down on and into Forbes Field. While a group of students wave and cheer in the foreground, undoubtably encouraged for the sake of drama by the Life Magazine photographer George Silk, Forbes Field lies below in a smoggy haze, surrounded by parked cars and row houses, dreamlike and idyllic in the silvery light.

A few years ago Craig Schmitt, one of the lead architects of PNC Park, commissioned a painting for his father of the stadium he was so proud to have been a part of creating. I made the cross state drive and went to a number of games, sketching and photographing. The variety of views and beauty of the surrounding buildings, rivers and hills was fantastic. While I did incorporate the figures in the foreground of the Silk photograph, the rest was based on my personal experiences. (with one fairly obvious exception)

This became the obvious place to start The BallPark Project version. And yet, when I went to scale it up, I found I had lost the spirit of discovery that is a prime motivator and inspiration of my work. The painting languished as I tried to reinvent something that had already been done. I’m just not cut out to simply “make it bigger”. It’s fun to look back on the in-progress shots and see how I struggled with it. 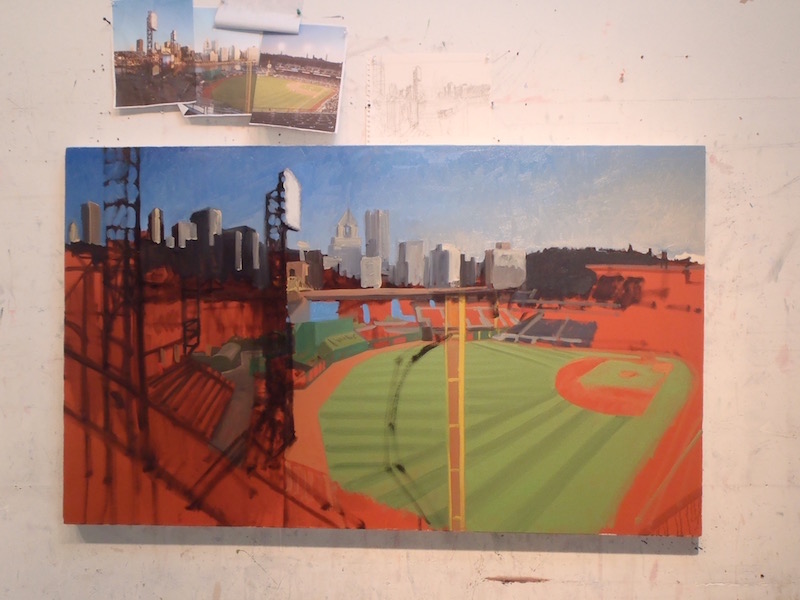 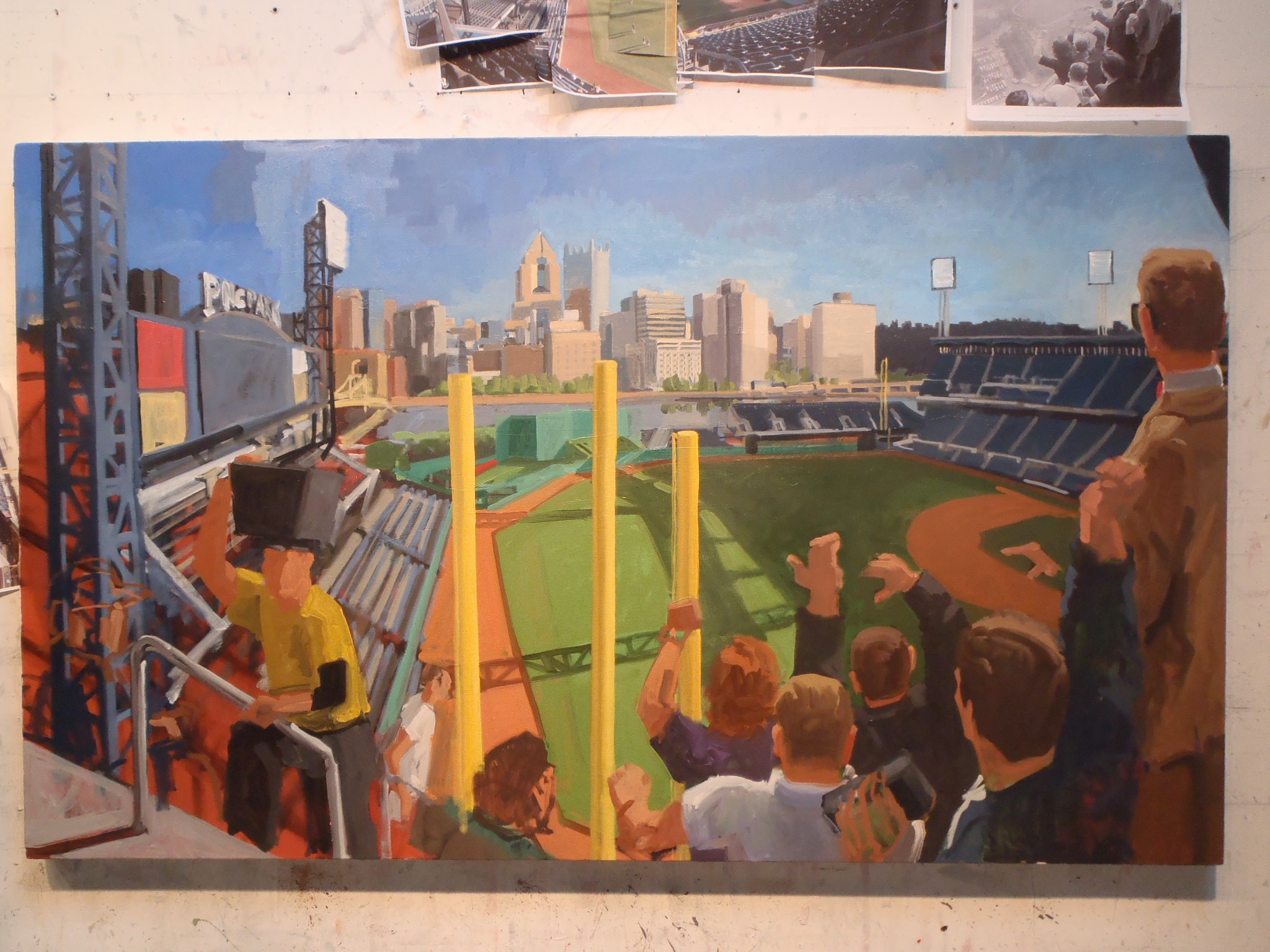 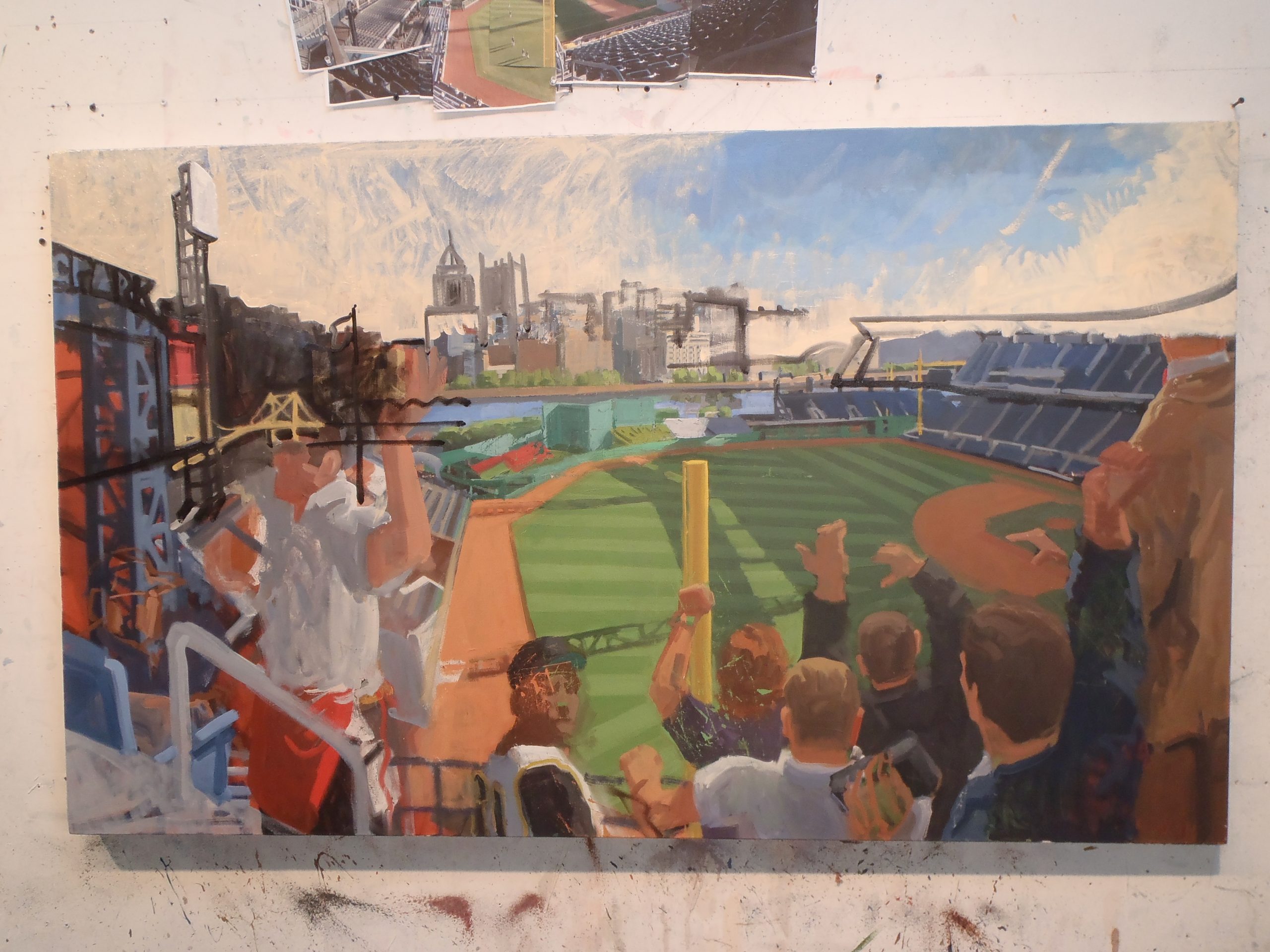 The mixture of rubbed out and recently sketched in outlines points to the desperation I was feeling. I needed to put it away, get out of the studio for a while and regroup. Baseball paintings and the BallPark Project were officially mothballed.

For almost two years, helped along by a mild winter, I painted exclusively out of doors, concentrating on a series of paintings of Philadelphia’s fountains and pubic sculptures. The summer of ’16 was brutally hot and after an exhibit of the statues and fountains last fall I was exhausted. As I was scratching around the studio one morning, pulling out all sorts of old stuff looking for something to get excited about a friend came by, saw the Silk photograph, and the unfinished “PNC Park”. He thinks it’s new and I’m recreating that iconic scene. “No no no”, I assure him, “that’s just what I used for the foreground figures on a commission. And it’s Forbes Field, besides”. (As if the ballpark itself has anything to do with the drama of the photograph) A couple hours later it hit me- that was my way back into the painting- totally recreate the light effect of the photograph with PNC as the stadium. Have PNC Park, the city and surrounding hills bathed in romantic, hazy light, emphasizing the figure/ground drama of the foreground figures against the landscape behind. At that point it came together quickly, just seemed to paint itself, as they say. 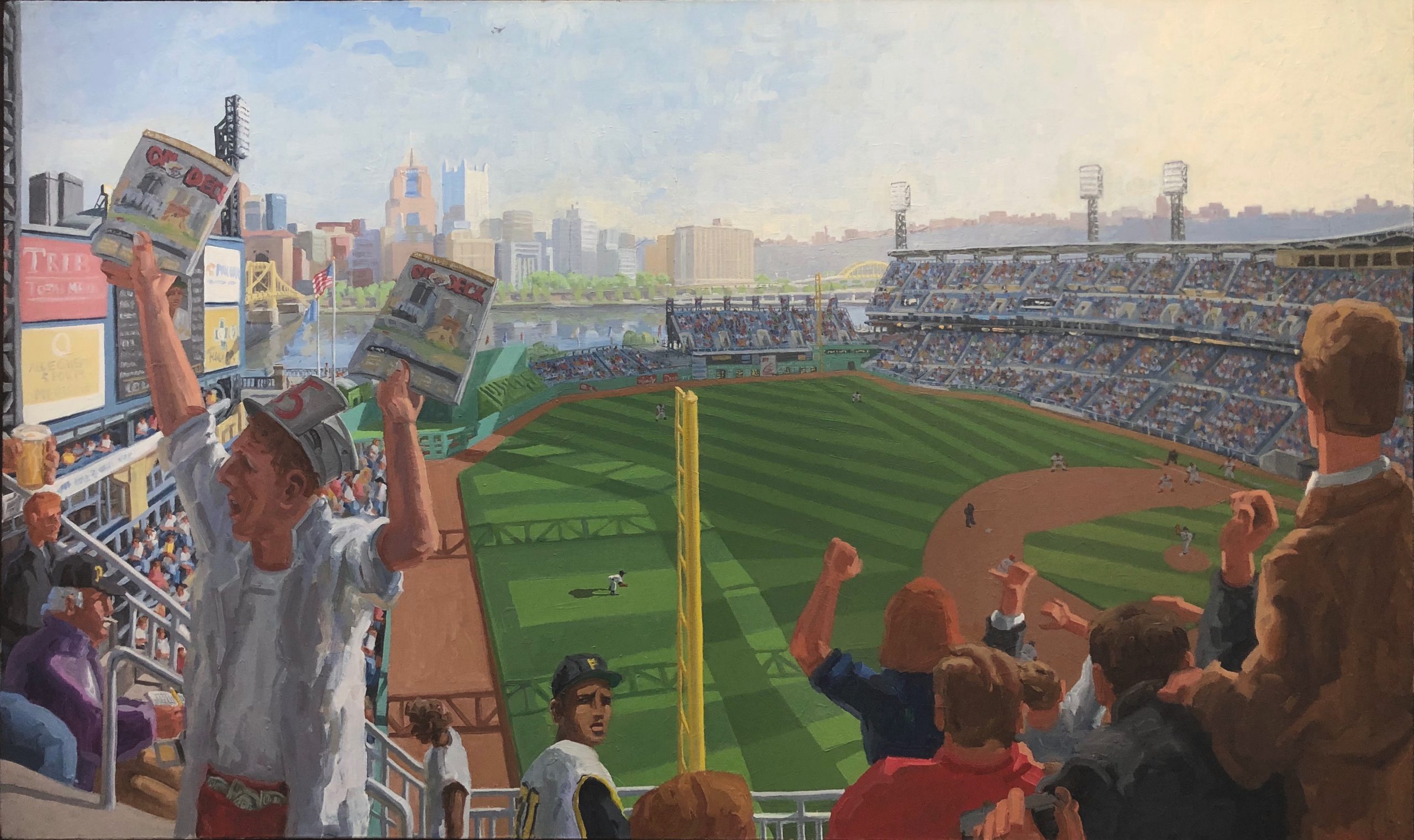