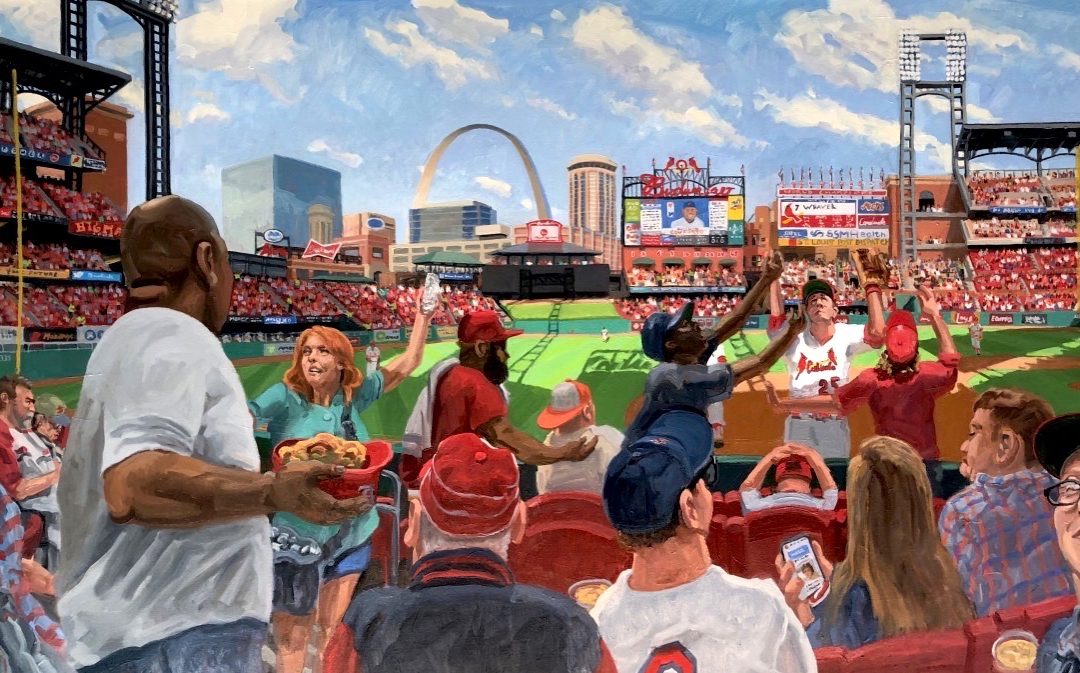 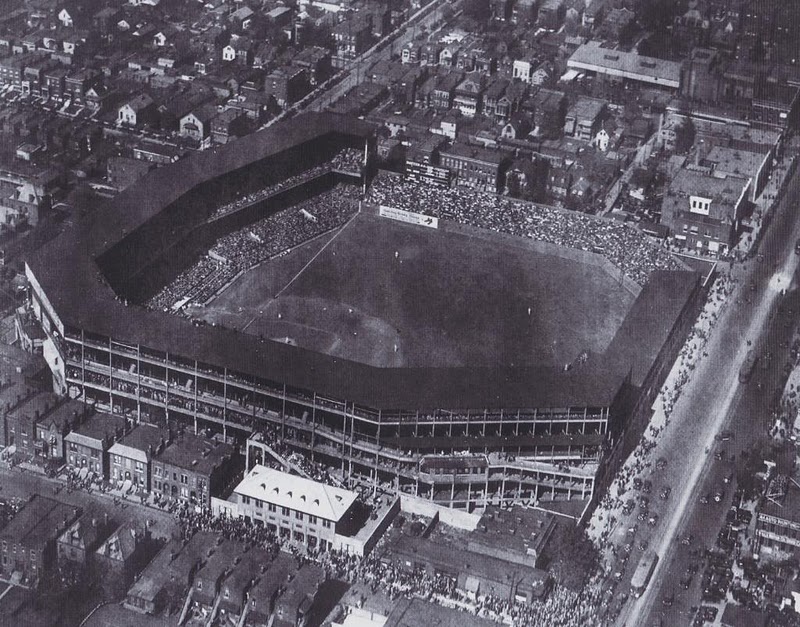 I’m a little foggy on the exact details of the first ballgame I ever attended, but it was definitely at Busch Stadium in St Louis. Originally named “Sportsman’s Park”, it was in a densely populated urban area that had recent changed from predominately Italian and German, to African American. I was eight.

My Dad, Grandfather and I, the three Max’s, drove in from the leafy suburbs and parked on someone’s lawn, a new cottage industry with the rise of the automobile. Very black kids in very white tee shirts waved us onto front yards a short walk up Grand Avenue to the gates of the ballpark. I wish there was a picture of some kind commemorating the event but alas. It was 1961 and the Cardinals were playing the Phillies. I clearly remember this because as an avid reader of the morning St Louis Post Dispatch sports page I knew the Phillies were in the midst of what turned out to be the longest losing streak in modern Major League history, an astounding 23 games. In a Row. Ouch. 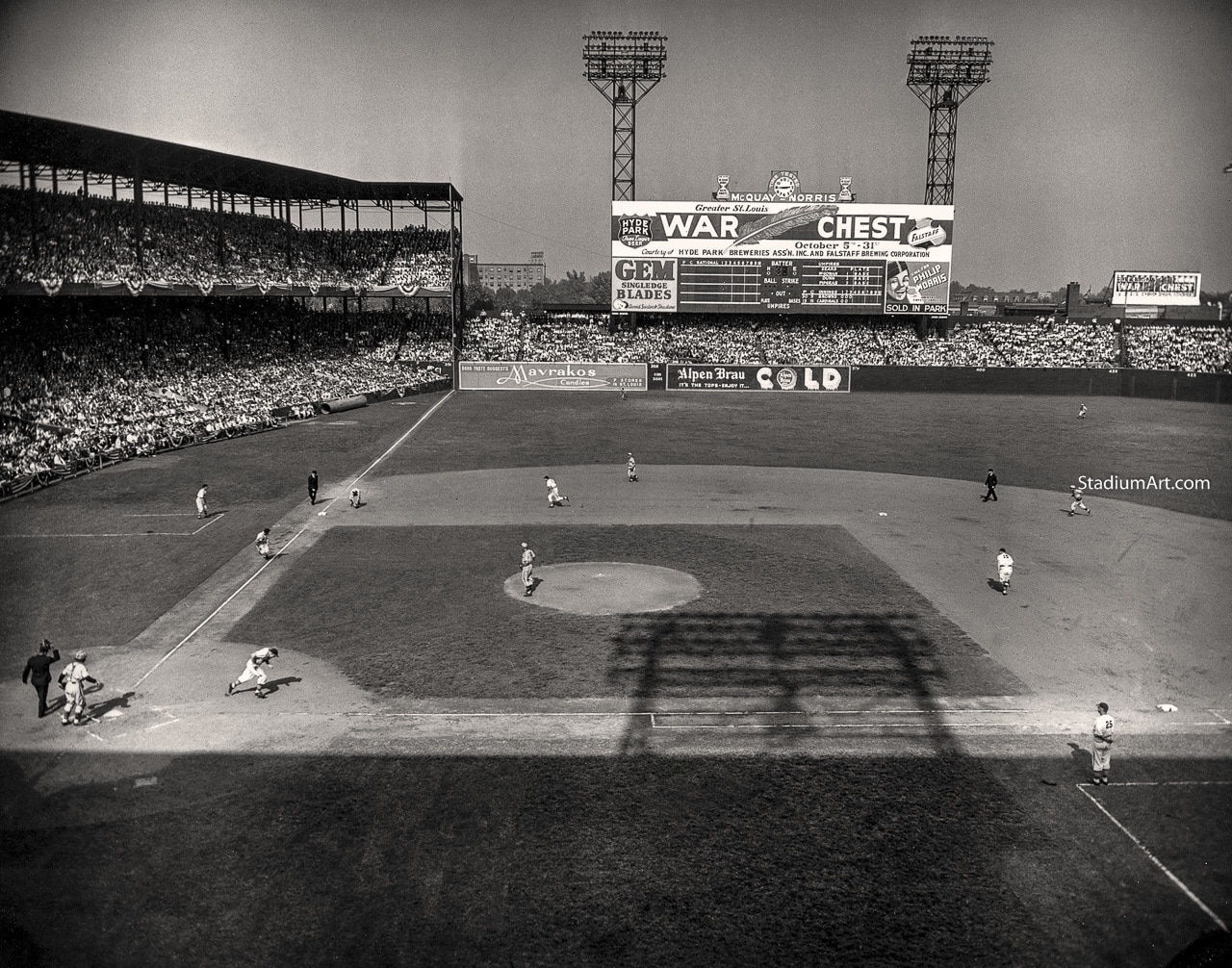 This was great as far as I was concerned, a victory all but certain. So I was shocked when early on the Phillies cleared the bases with an extra base hit, the gray and red away uniforms rounding third and running home in a line. Not to worry, by the end the Red Birds had caught up and prevailed by something like 10-8. Another clear memory is sitting in the right field pavilion, looking into the low sun (what a terrible situation for the right fielder!) and seeing a young, limber Henry Aaron tee off and hit low liners into the gaps time and again. There was the smell of cigar smoke, not only from my Pappy, but fans all around. Almost all the men (white) had crew cuts, the women wore cotton dresses and many, including myself, kept score. The lineups were actually printed in the scorecard with only the ninth spot in the order left blank. It had the aura of heaven to me, and still does. 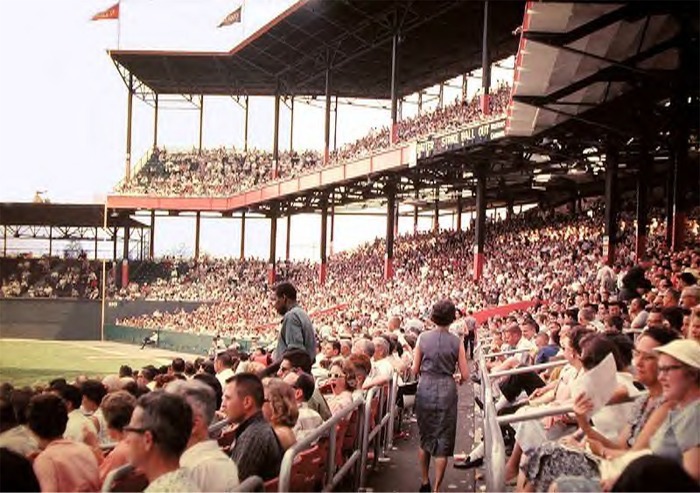 Skip ahead a decade or so. One of my last memories of my grandfather is going to a game at the newly opened concrete bowl Busch Stadium. Old Sportsman’s Park had been abandoned in favor a multi purpose facility at a “safer” downtown site, a product of the urban renewal that demolished beautiful old buildings by the river front in favor of the newly constructed Arch, Busch Stadium and a whole bunch (acres!) of grass with nothing on it. 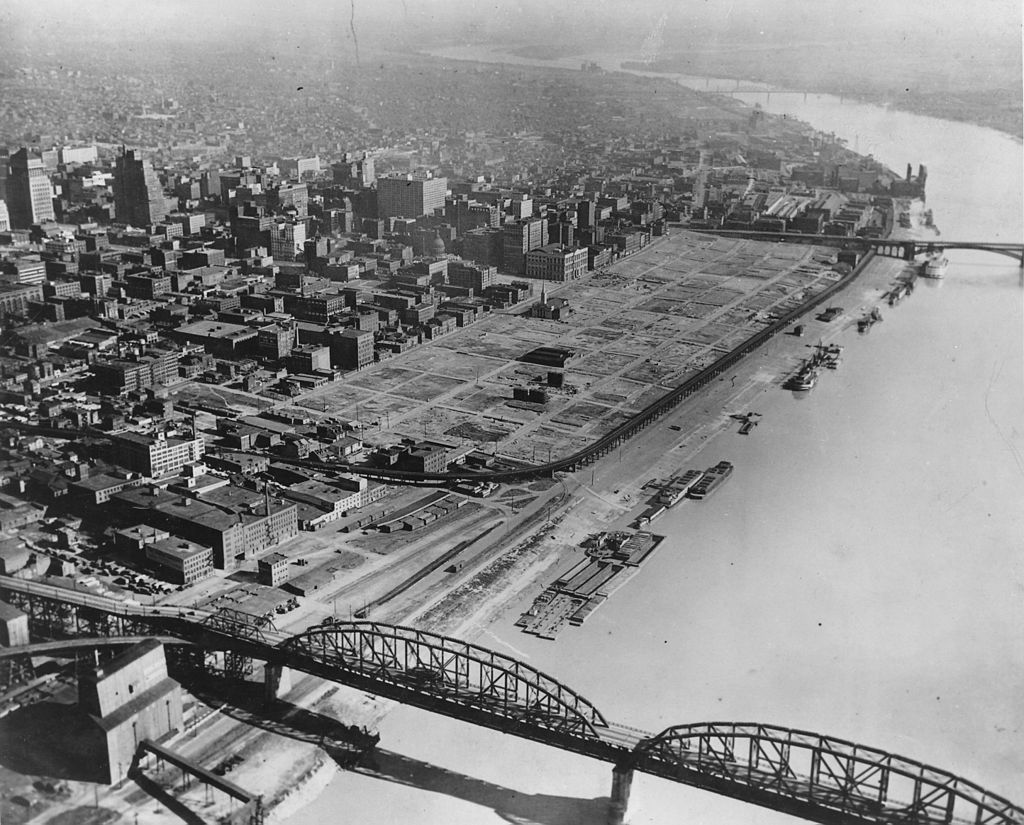 “That’s the last game I’ll ever go to” my grandfather said as we were leaving. We were all sorely disappointed by the bad sight lines and intense heat the enclosed stadium featured and became famous for. But he was feeling something else. The years had made him tired and it just wasn’t worth the effort any more. I couldn’t believe my ears and protested. It seemed he was giving up on life itself! But he was right, he never made it to another game. 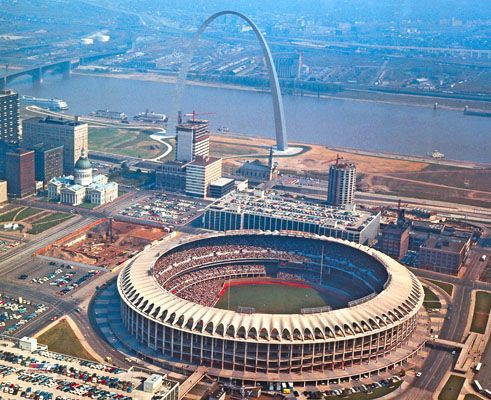 St Louis is, and has been since the late nineteenth century, crazy for baseball. A city of only 600,000 it consistently ranks in the top two or three in attendance in all Major League Baseball. As a result, or because of it, the Cardinals have won the second most World Championships, 11, behind only the New York Yankees. The town is also a hot bed of baseball derived games like “Cork Ball”, and “Indian Ball”. My Dad taught me these games and friends and I play them today. It’s not a stretch to say the culture of baseball in St Louis is unequaled anywhere.

Busch Stadium III is built basically on the spot where Busch Stadium II was, just west of the Mississippi, facing east so fans are afforded a wonderful view of the magnificent Eero Saarinen designed St Louis arch. It’s almost inconceivable by today’s design criteria that an open air building drawing thousands of people to it would not afford views of one of the world’s grandest and most beautiful monuments. But, that was case in Busch II. The newest Busch rectified that mistake by opening up the centerfield stands and replicating the dense street activity outside of old Sportsman’s Park with an outdoor mall of small bars, restaurants and shops, perhaps surprisingly, not requiring a ticket for entry. It is a recently constructed neighborhood devoted to Cardinals baseball and, of course, Anheuser-Busch beer.

As ever, the painting began with a trip, sketches and photos. It was a beautiful day when I arrived in St Louis from Philadelphia, the first baseball appropriate day of the season in fact. It began, of course, with a visit to the arch, which I saw being constructed in the early 60’s when visiting my grandparents in Ferguson, the now famous suburb being ground zero of the “Black Lives Matter” movement. I didn’t realize it at the time, but when I was first going to games at Sportsman’s Park Black fans were confined to the pavilions in left and right field, which shows how clueless the beneficiaries of segregation can be regarding the wrongs of the past.

Family and St Louis baseball obviously go together, so I met cousin John Maxwell and his wife Kit to watch the game, Cardinals vs. the Mets. They appear in the far lower left corner of the painting. Unusually, from the very early sketches the composition was basically organized, the arch occupying a unifying position just left of center. As ever, the St Louis fans were positive in outlook, and into the game. A major difference being the large number of African American’s in what were once called “box seats”, the exclusive area behind the dugouts. 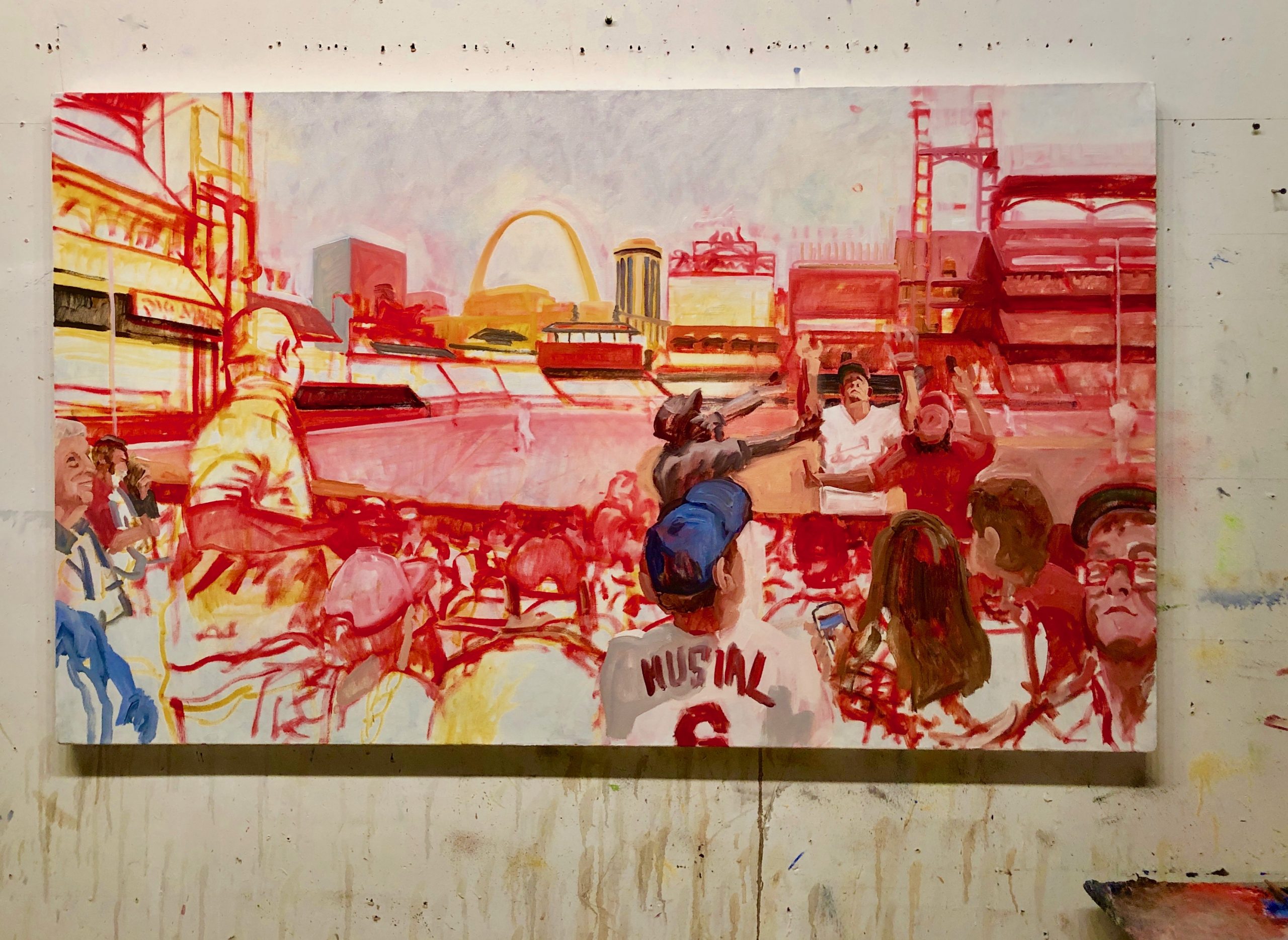 At some point in the game a high popup came our way, fans and players converged, some ducking for cover, some reaching out, some shying away, some oblivious. It seemed a good metaphor for the whole experience, people reacting differently to a dynamic situation. 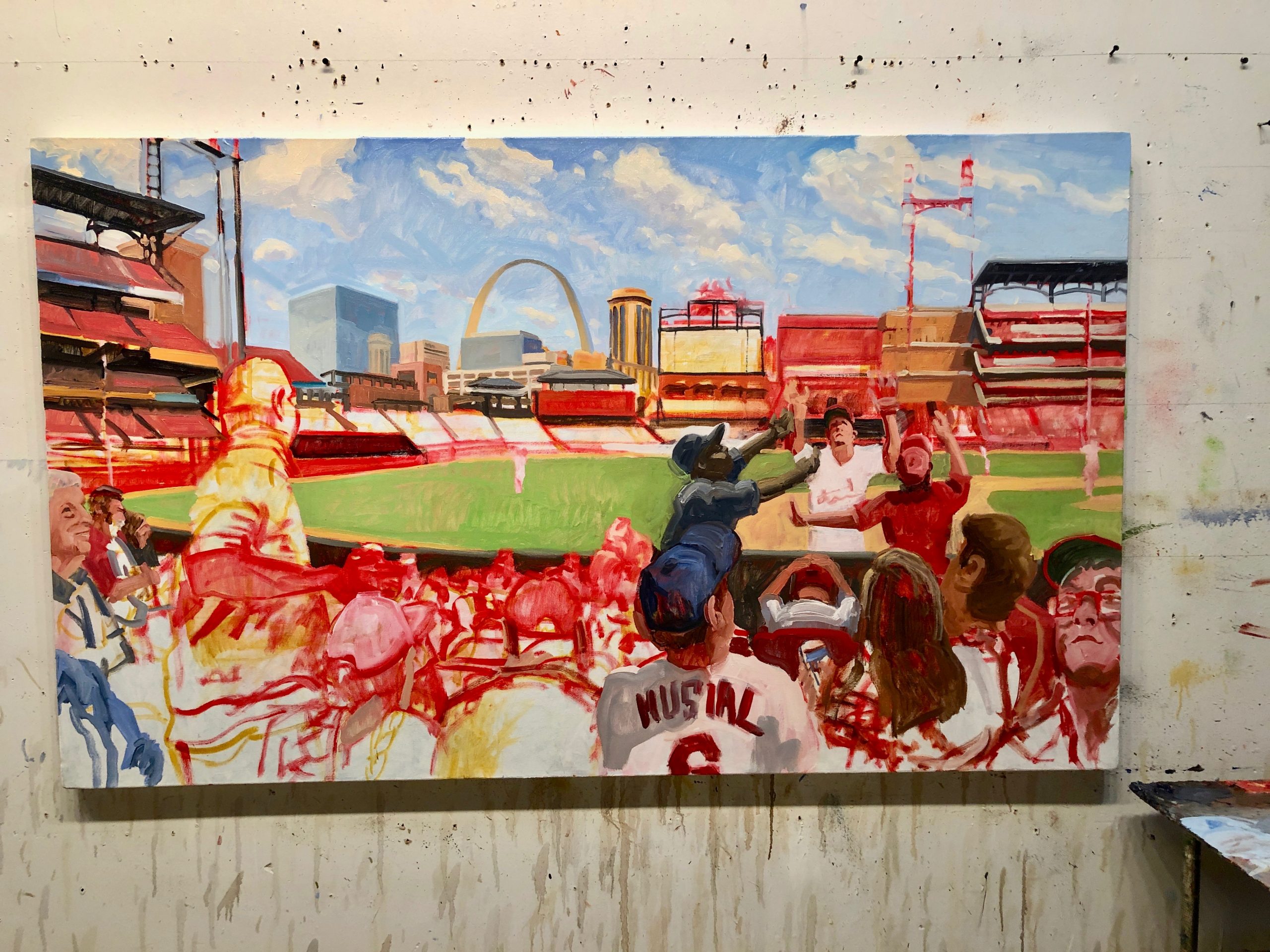 Venders of various kinds were added. Stan Musial, the Cardinals greatest hero, made a symbolic appearance, but then was scaled back. The hot dog tosser was actually lifted from a sketch I did in Kansas City a few days later, but she seemed a good fit with the big bald guy finding his seat holding an ice cream sundae in a souvenir helmet. 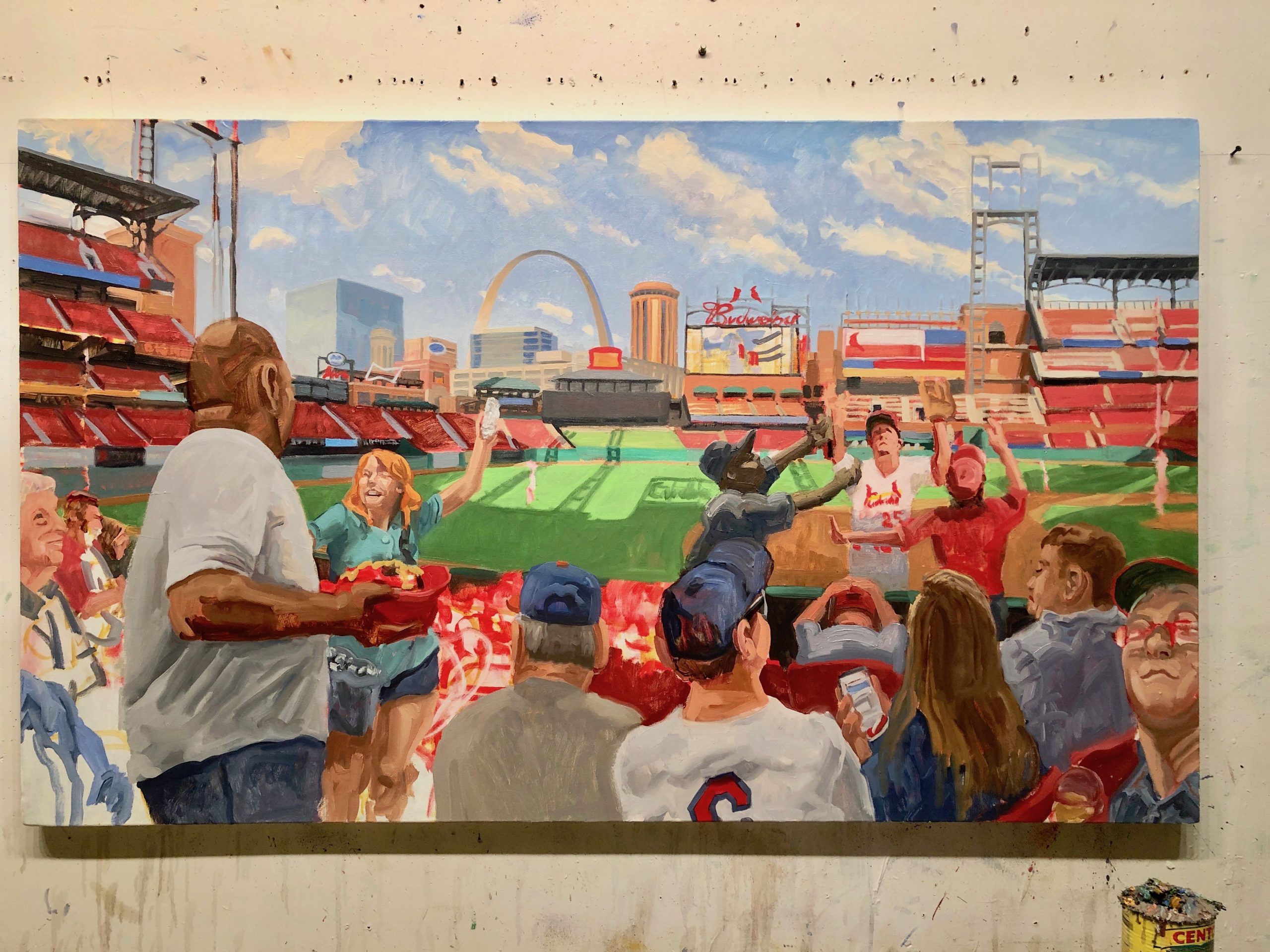 I stuck myself in the far right lower corner taking a selfie. Perhaps I should have had the girl in front of me looking at Tinder on her phone, instead of Facebook. And of course I added a beer in the cup holder in front of me. It is a Budweiser, the “king of Beers”, in honor of my Dad who always stayed true to his St Louis roots, maintaining to the end that “Budweiser, well, it’s just the best beer!” 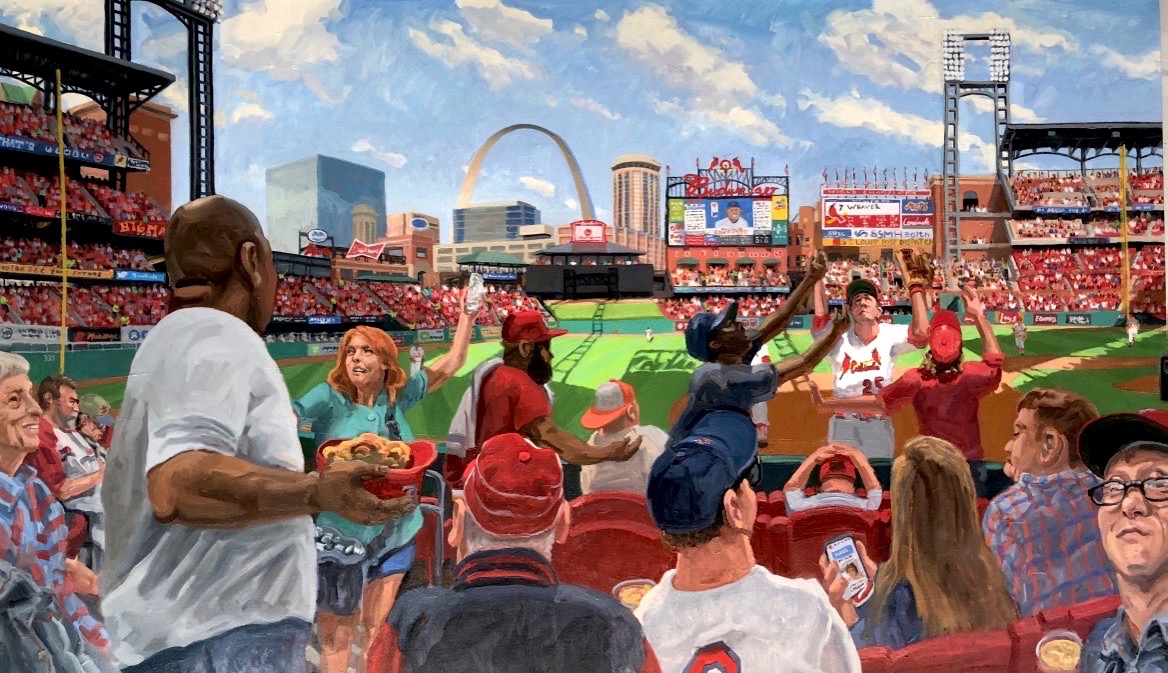