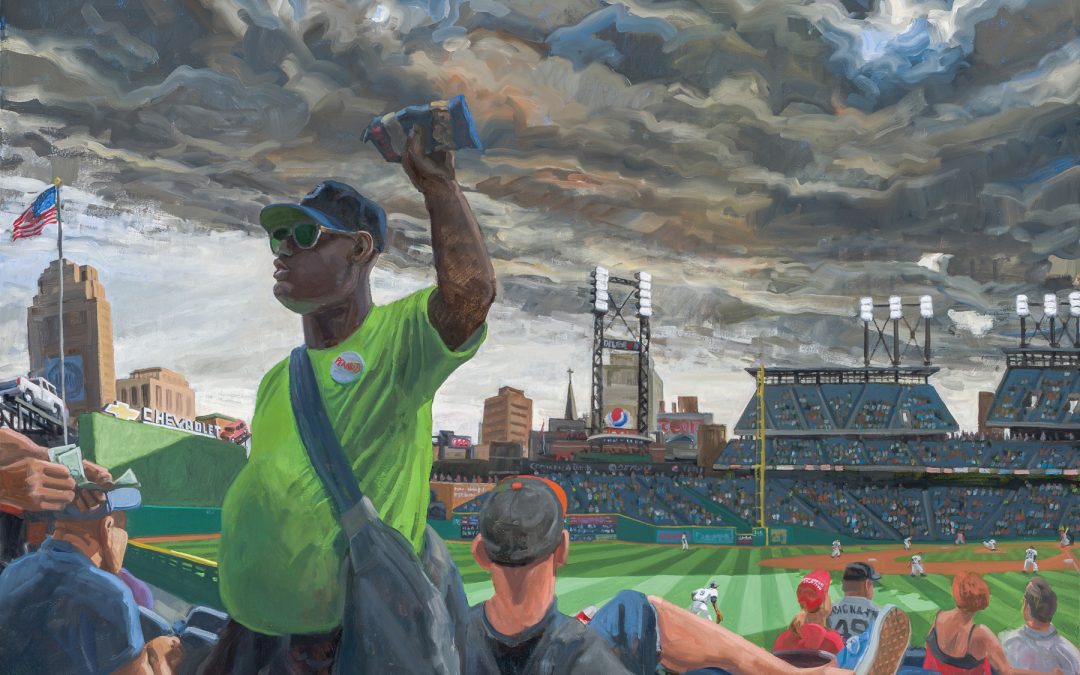 I have always liked watching the game from high up. You see the geometries better. The sense of space is exaggerated. When the ball is put in play two cycles of motion spring suddenly to motion- the batter and baserunners running around the bases, and the fielders chasing the ball and lining up for throws. The crowd roars to life. You wait wait wait, and then boom, all heck breaks loose. 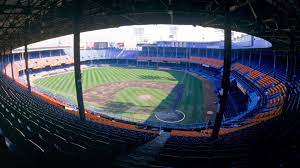 There was no better upper deck than Tiger Stadium. It wrapped almost all the way around the field and was cantilevered out so that the front row was perched over the field, looking down, literally a “birds eye view”. It was elemental and intense. You were incredibly close to the action and you needed to pay attention because foul balls came in hot. A was staple of my baseball imaginings, it was the background of many of my early baseball works because of it’s primal quality., even though I had never been there in person. It wasn’t until 1999, it’s last season, that I made a “nick of time” pilgrimage.  Every minute I spent in Tiger Stadium was like drinking an aged, distilled baseball liquor. 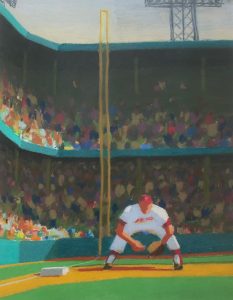 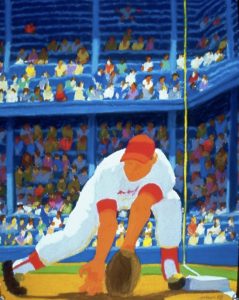 1968 was one of the greatest, if not the greatest season in Detroit Tiger history. The Tigers came back against the Bob Gibson led Cardinals after falling behind three games to one. Mickey Lolich won three games, out dueling Gibson in game 7. But politically and socially, nationwide, ’68 was a mess. The neighborhood surrounding the corner of Michigan and Trumbull were badly affected by riots following Dr King’s murder. In addition, the recession of the 70’s and the rise of Japan and Korea in the automobile industry made for rampant unemployment, a classic “rust belt” recipe.

So when I made the trip in 1999, Tiger Stadiums last, things were rough. The only businesses around were a hold out Tiger themed bar, and a couple salvage stores selling relics from the the previous era of prosperity and architectural ornamentation. The area had a decided “Mad Max” aspect to it, the shop keepers and bar tenders fully tattooed and mohawked. There were only vestiges of the glory years at Michigan and Trumbull, some bars, a diner and a souvenir shop or two. The blocks around Tiger Stadium were increasingly abandoned, crumbling, forlorn and, if not dangerous, scary. I’ve heard the city has since built a small public ballpark on the site for use by the neighborhood, which is great news. 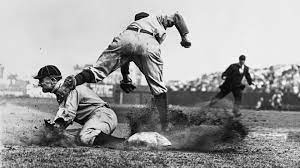 But the ghosts of Ty Cobb,(perhaps the greatest competitor in baseball history) Hank Greenberg (baseball’s first great Jewish star), Al Kaline, and Denny McClain, (still baseball’s most recent 30 game winner in that epochal year 1968, over 50 years ago) were still in attendance. Never mind the narrow aisles, subpar restrooms, lack of concession areas, paucity of parking, etc etc, Tiger Stadium had everything that mattered regarding the game itself- character, great sight lines and history. But, due to circumstances beyond it’s control, it was fated for the wrecking ball. A new downtown park of the HOK (designer of Camden Yards and numerous other newer ball parks) generation was to be finished and ready for the 2000 season. 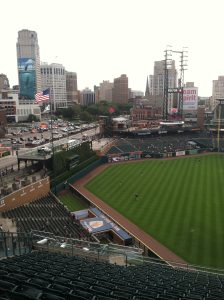 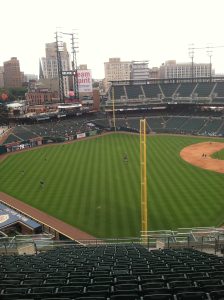 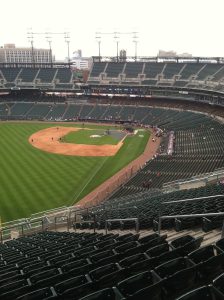 When I visited Tiger Stadium’s replacement, Comerica Field in 2017, the weather was dark and menacing. The crowd, however, was quite decent considering that and the Tigers terrible record. They had a few Hall of Fame caliber players, chiefly Miguel Cabrera, who only a few seasons beforehand achieved the triple crown.

One of the distinguishing characteristics of Comerica are the very dynamic Tiger sculptures that roam around and about the exterior of the ball park. They are quite impressive and especially enjoyed by the young fans. Kudos to the designers and city planners that conceived of and executed this public art. 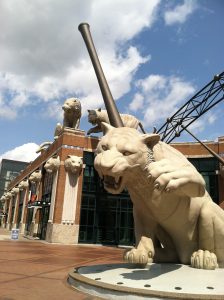 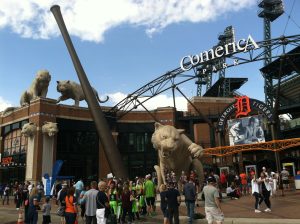 Downtown Detroit is definitely on the rise, partly due to Comerica and the new hockey/basketball venue that is  nearby, but there is no replacing character and history of old.

I decided to take a different approach to the painting of Comerica Park. The economic distress of Detroit made a big impression on me. While the new Park was up to date and attractive in every way, the history and change in the auto industry loomed large in my mind. I decided to have a large figurative focus in the painting, a vender, and behind him in the background,a fading sign for the UAW (American Auto Workers), and a not too subtle allusion to the reason for the new ballpark, a fist full of cash. The stormy sky seemed a perfect compliment. 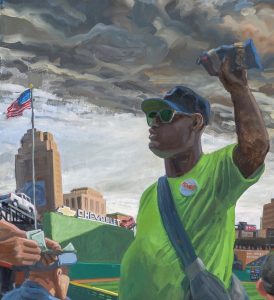 My friends from Detroit are none too pleased with my dark take on what is a wonderful ballpark in wonderful baseball town. While the BallPark project is a personal travelog of my travels and experiences in the baseball stadiums of MLB, it is also, indirectly, a story of the history of the game and the cities the teams represent. 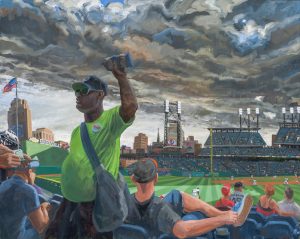