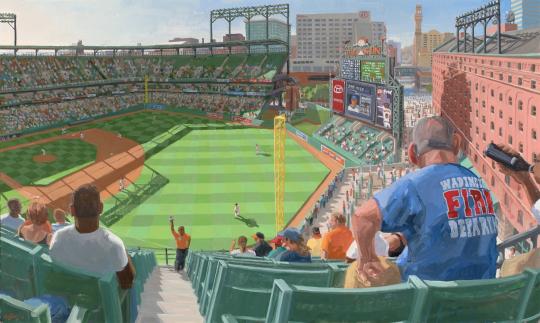 Paintings often contain a visible record of past lives. Underneath the finished work is a web of built up edges, bumps and daubs that were once on the outside; a color, a piece of the picture, a part of the space, that are now only visible as texture covered over by subsequent painting. They give the painting a weight (figuratively and literally), a sense of history, a kind of visual gravity. The process that leads to these past lives is exciting but risky. The thrill of newness and discovery can fade to a sense of desperation where large, whole scale changes are contemplated and acted upon.  It’s an ongoing battle- having a strong idea, confident about it’s rightness, and then, “upon further review”, realizing it too can be improved upon. It’s easy to get lost and just want to start over or quit. But if one can keep with it, if the original idea was strong enough and the subsequent lives can overlap and intertwine, the end result is worth the hard work and frustration. “Orioles Park at Camden Yards” is that type of painting. It’s taken longer than the first two of the project put together. It may or may not be better. It certainly is heavier. But at last it is finished. (I think) Any thought of this project sailing along smoothly and being done in some sort of “Julie and Julia” like timely fashion is out the window, but hopefully a different kind of depth has entered the picture, so to speak. 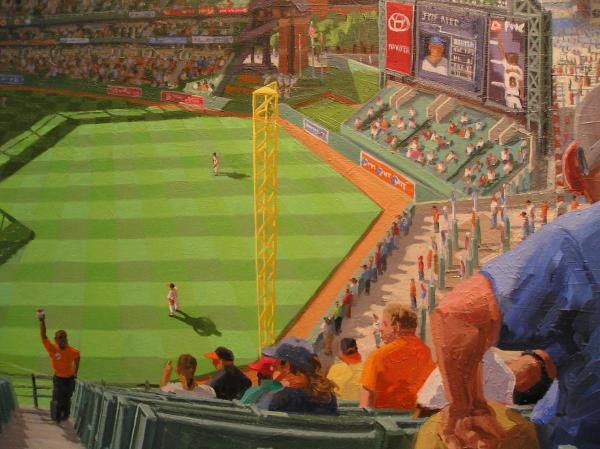 Baltimore baseball has figured prominently in my work for almost 30 years. I remember having a baby sitter from 10am to 4pm and driving down to the quiet tree lined neighborhood Memorial Stadium was squeezed into, painting in the parking lot, and driving right back. That’s 4 hours of driving for two of painting. I painted in the same parking lot during the last night game in the history of Memorial Stadium. There was a party inside and out and I had to fend off many offers of “refreshment “ from interested fans all evening. I’m not sure what drew me to the outskirts of Baltimore time and again; something about the intimacy of the neighborhood, the gigantic “War of the Worlds” like light towers, the way the concrete stadium became a glowing bowl of light at night, and the people- a much more relaxed and diverse crowd than intense, sometimes bitter Philadelphia fans. On more than one occasion I’d paint in the parking lot all afternoon through the early evening, find a friendly security guard to let me in so I could grab an end of the work day beer and take in the last few innings. There were college students on dates, families, old hard core fans with transistor radios pressed up to their ears and enough space for everyone to stretch out a bit. It was as idyllic an American scene as one can imagine.

Oriole Park at Camden Yards has much the same atmosphere in part, of course, because the Orioles were mired in last place during the games I went to this summer. But the team is young with some budding stars and is bound to improve. Personally I’d rather it remained easy to get a last minute ticket, wander around, sketch from different vantage points with my backpack on the empty seat next to me and a beer vender coming up the aisle.

After many attempts to find a vantage point with Eutaw Street, a bit of the city in the back ground, scoreboard, etc, I settled on much the same view as the first two BallPark Project paintings, high up in the right field stands. 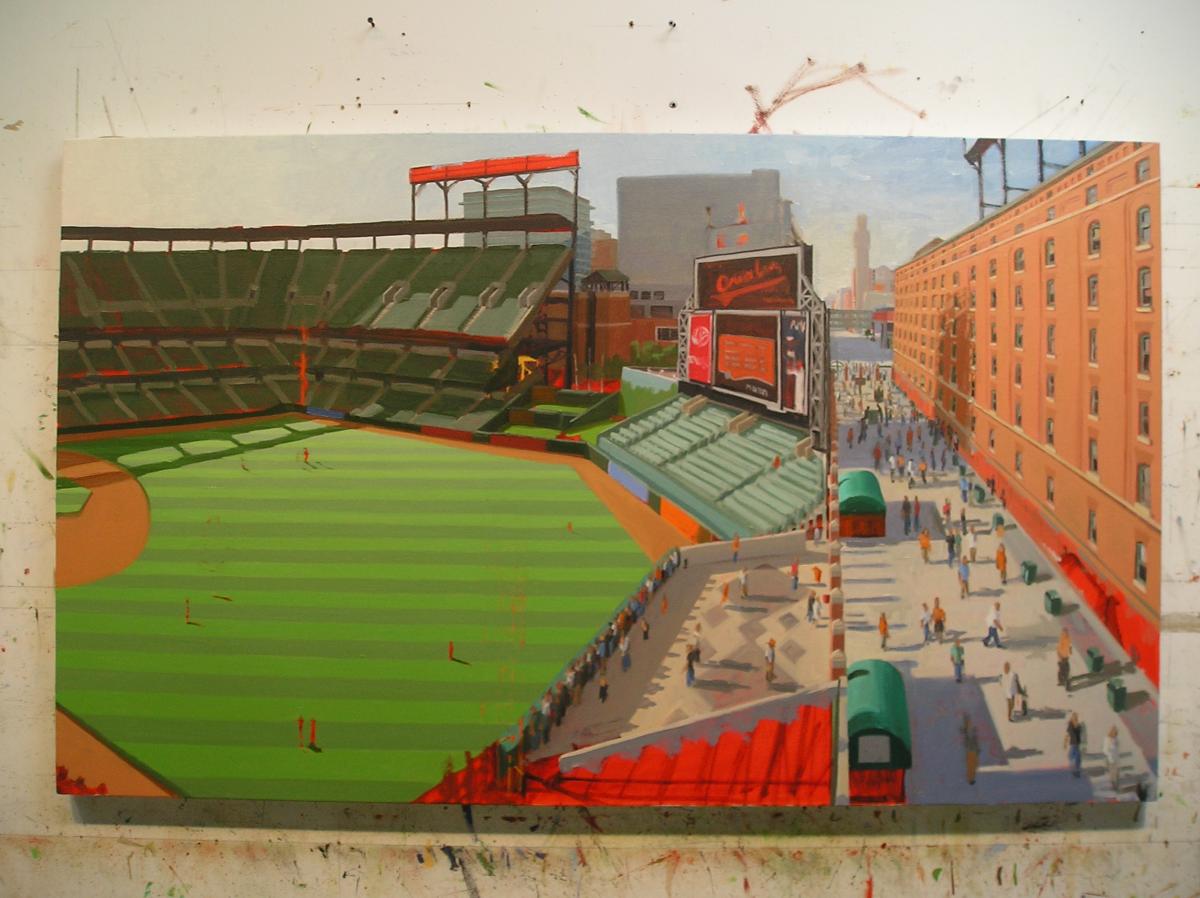 At first the painting painted itself and I was already thinking of number four. After a visit with artist friend Michael Webb I decided the empty foreground wasn’t going to make it. Compared to “Petco Park” and “Doubleplay at Citizens Bank Park” it looked a bit sterile, almost forlorn.  Referring to my sketches and photos I began painting a partially filled upper deck in the foreground. 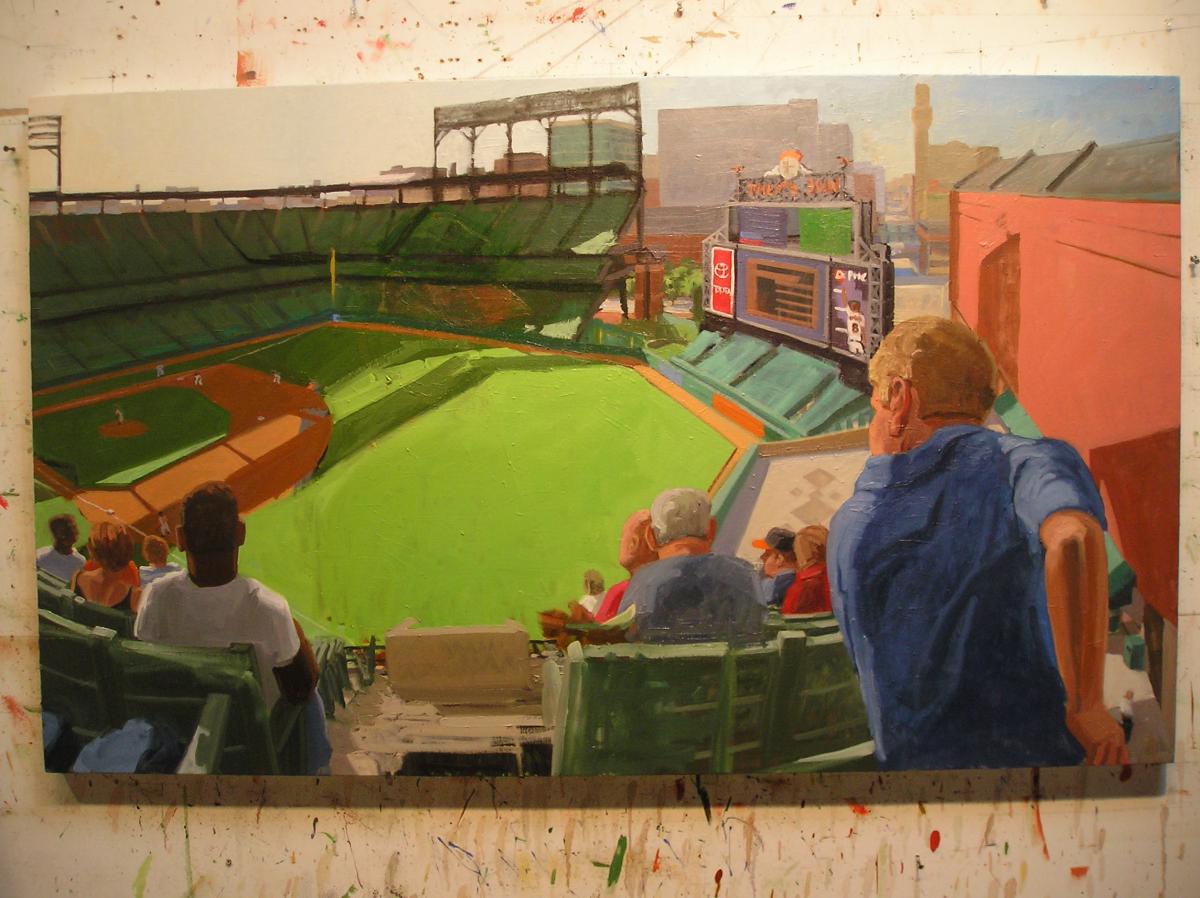 In a classic case of getting carried away with ones own enthusiasm I hit on the idea of an old vender, probably a veteran of Memorial Stadium, handling money, while a fan reaches for his wallet, the bottom line of all professional sports.  After a weekend to think about it I realized my oldtimer vender was a bit too much. I did want some foreground figures to bring the eye around the bottom part, but the painting was supposed to be about the ballpark. The vender had to go. 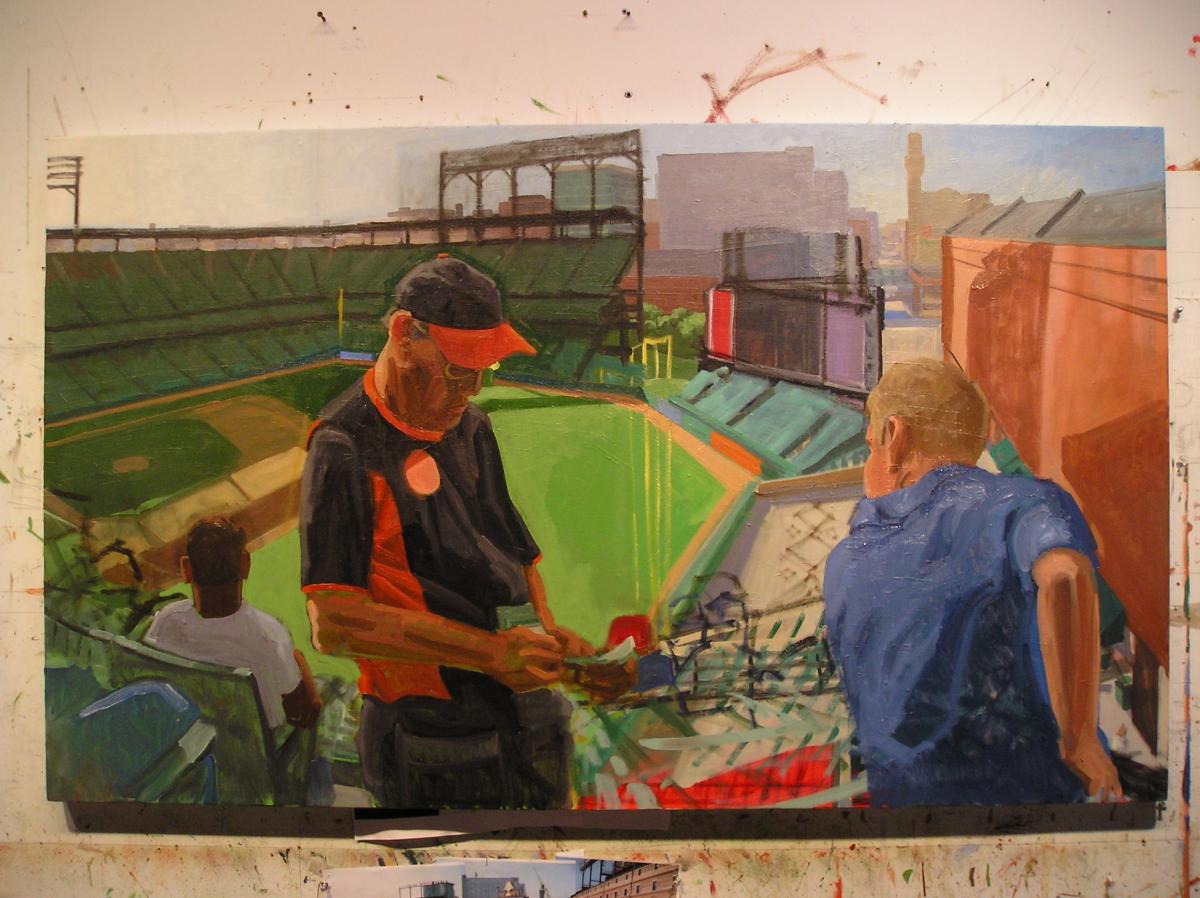 I invented a flight of vertigo inducing stairs leading the eye down to the foul pole. I want the eye to be pulled this way and that, out to the edges, the corners, and deep into the painting, and this was a way to lead the eye from the heavily painted, dense foreground of seats and figures to the pristine green of the perfectly manicured field. I also liked the introduction of the ubiquitous lifting of the bottle on the far right. (Note the barely visible ghost of the vender’s hat and head in the repainted left field stands.) 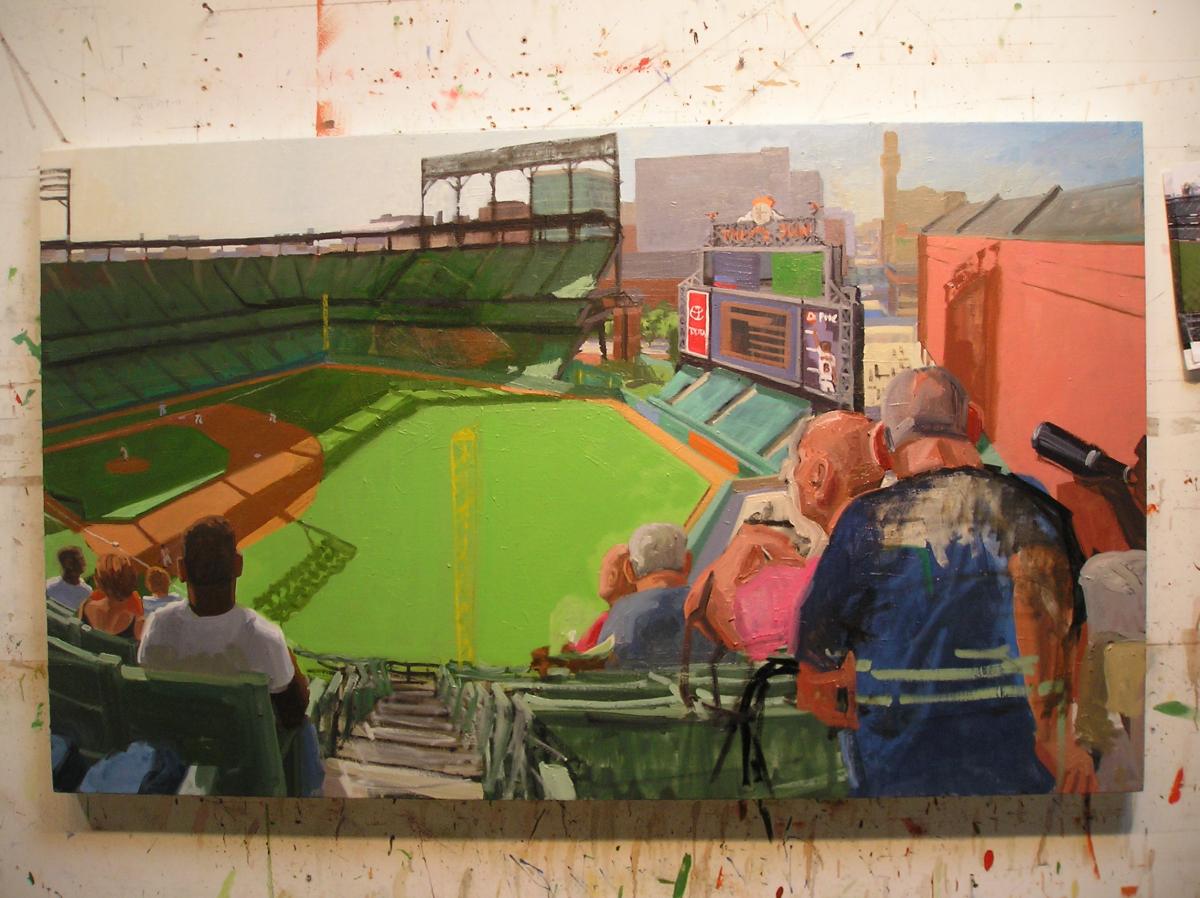 The vender in my head would not be denied, so he returned- only farther away. However, the process of adding foreground figures had covered over virtually all of Eutaw Street. The bald guy in the pink shirt was now a goner.  And the position of the foul pole had become a problem. It didn’t line up with the base line and was right where I wanted the right fielder. By moving the pole to the right the fielder is isolated in the light, waiting and alone with his shadow trailing behind. 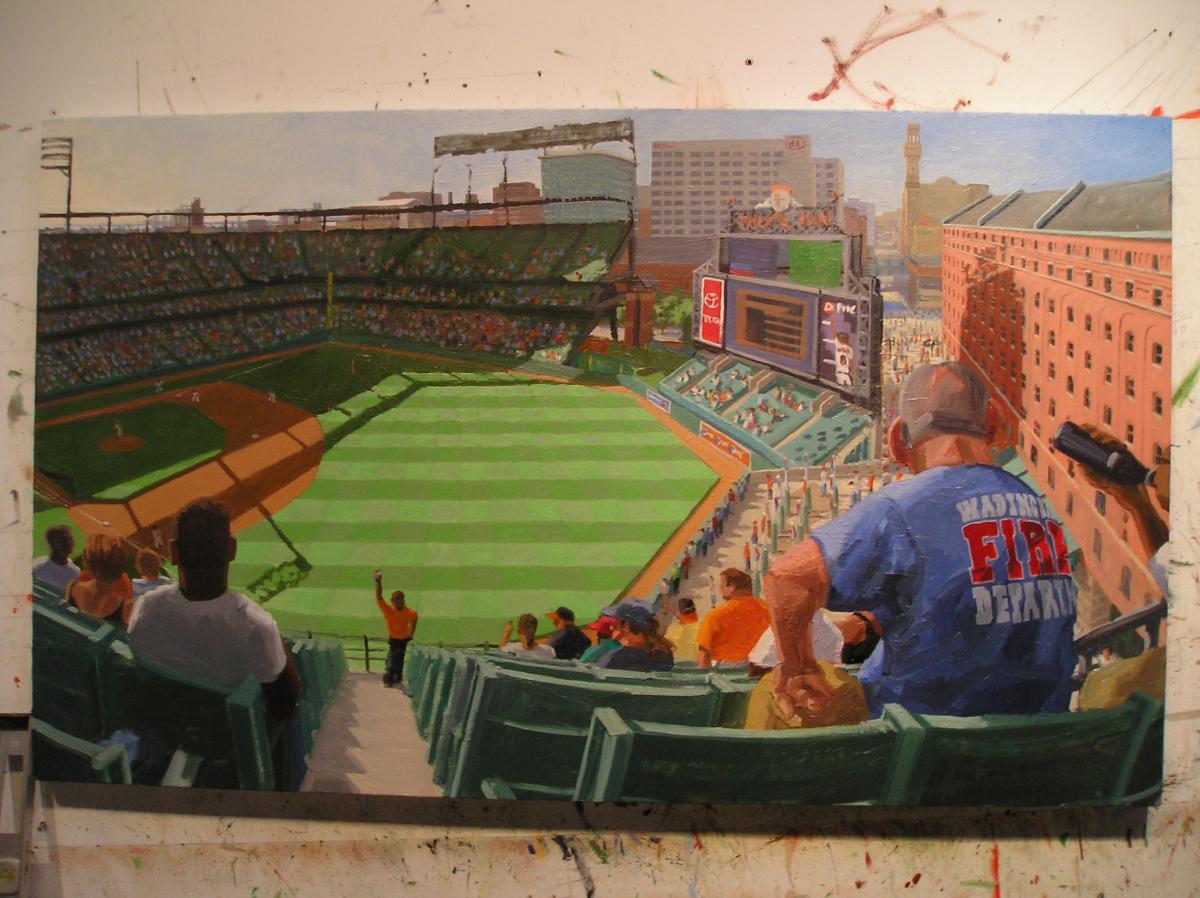 After three months it is finally time to move on.