The Korean Baseball Organization, like almost everything Korean, is surprisingly new. Founded in 1981, it is on a par with the Japanese Baseball League, which dates back to 1936. At the time of the KBO’s founding South Korea had a GNP less than Ghana’s. It is now the 15th largest economy in the world, approximately 18 times that of Ghana. All of this is to say that Korean baseball is the real deal, as the increasing number of South Koreans in MLB demonstrates.

Korean baseball is in a way a throw back. Small ball reigns. The sacrifice is huge and hitting behind the runner a must. Smooth form is everything. Hustle, maybe because it makes the opposition look bad, is in short supply. There is a lot of ambling in the KBO. And, as we found out, the baseball season overlaps monsoon season so you play in the rain. When standing water pools up in the infield a small army of grounds crew comes out to soak it up with towels between innings. In a culture where the worst sin is that of disrespect, players, managers and umpires mull over disagreements until one side finally accepts the situation and leaves the field. The games, therefore, are interminable, 4 hours easy. This flies in the face of Korean impatience. Having been subjugated alternatively by the Chinese and Japanese throughout their history, Koreans are now in a hurry and are close to the most technological and forward looking people in the world. Just not in baseball.

We came above ground from the Subway a bit after game time and were greeted by rain and loud cheering. At first I thought something dramatic must have happened in Jamsil Stadium but soon realized that’s just the way they do it- constant organized cheering. Jamsil Stadium, built for the 1988 Olympics, is a concrete bowl similar in style to the cookie cutter ballparks now out of fashion in the states, but smaller. Our 10,000 won seats (aprox $10) were in the open so we decided to watch from under an overhang and stay dry. 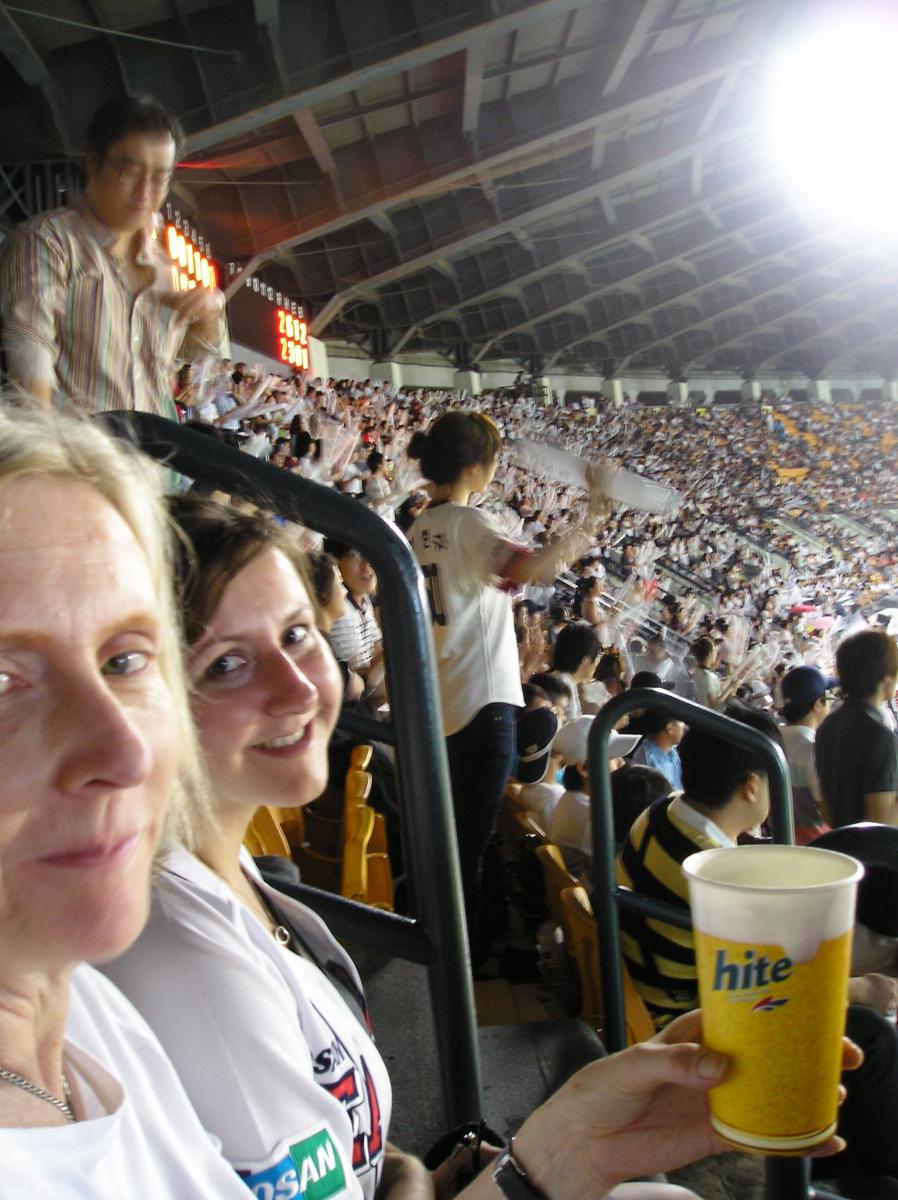 To our left a spectacularly energetic and limber guy in a Bears shirt, gymnastic pants and a bull horn led the crowd in a constant stream of organized singing, clapping and shouting. 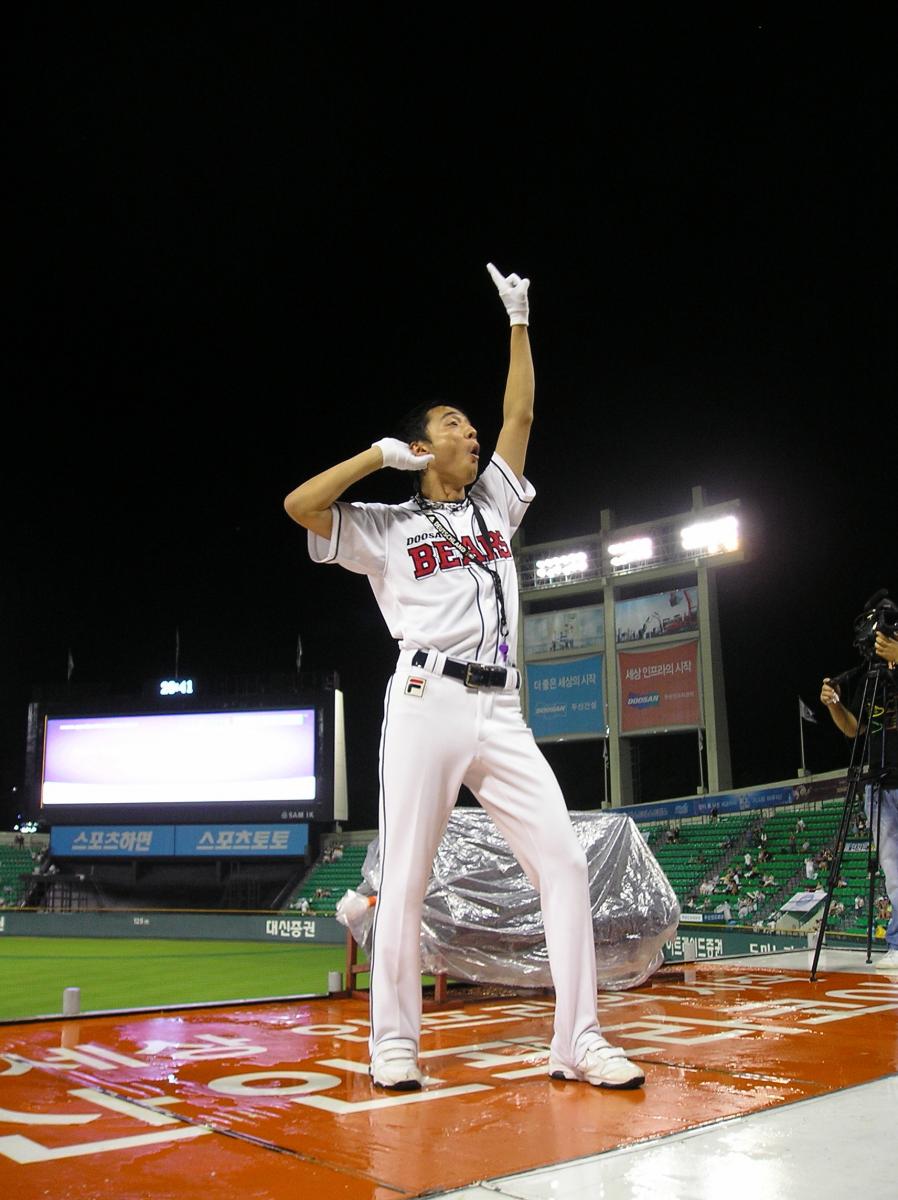 The youngish crowd followed his every move and exhortation while two extremely trim young ladies, in what used to be called hot pants, moved their arms and danced the pony in unison. This combined with two powerful drummers and the rhythmic whacking of thousands of thunder sticks (those inflatable plastic clappers) took place while the pitcher did something as inconsequential as keep a runner close to first base. 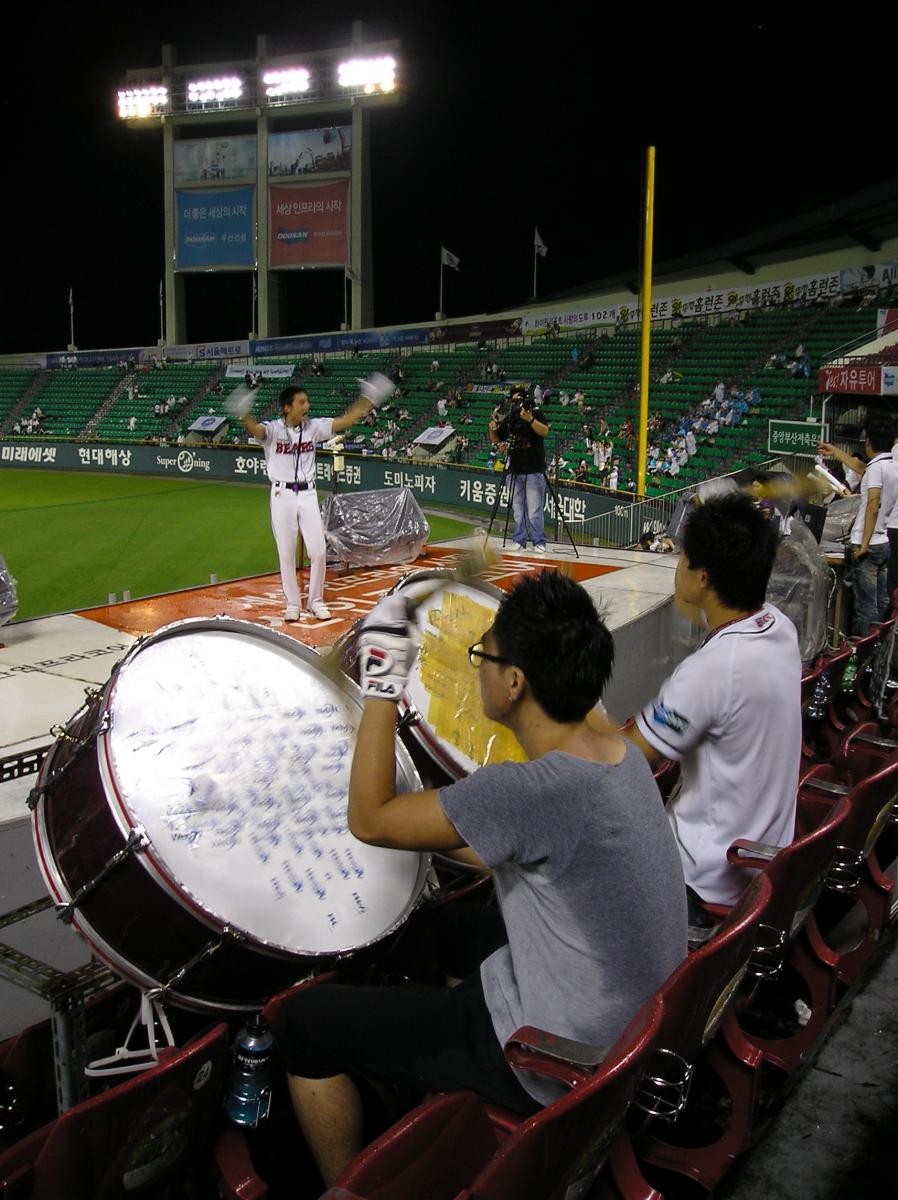 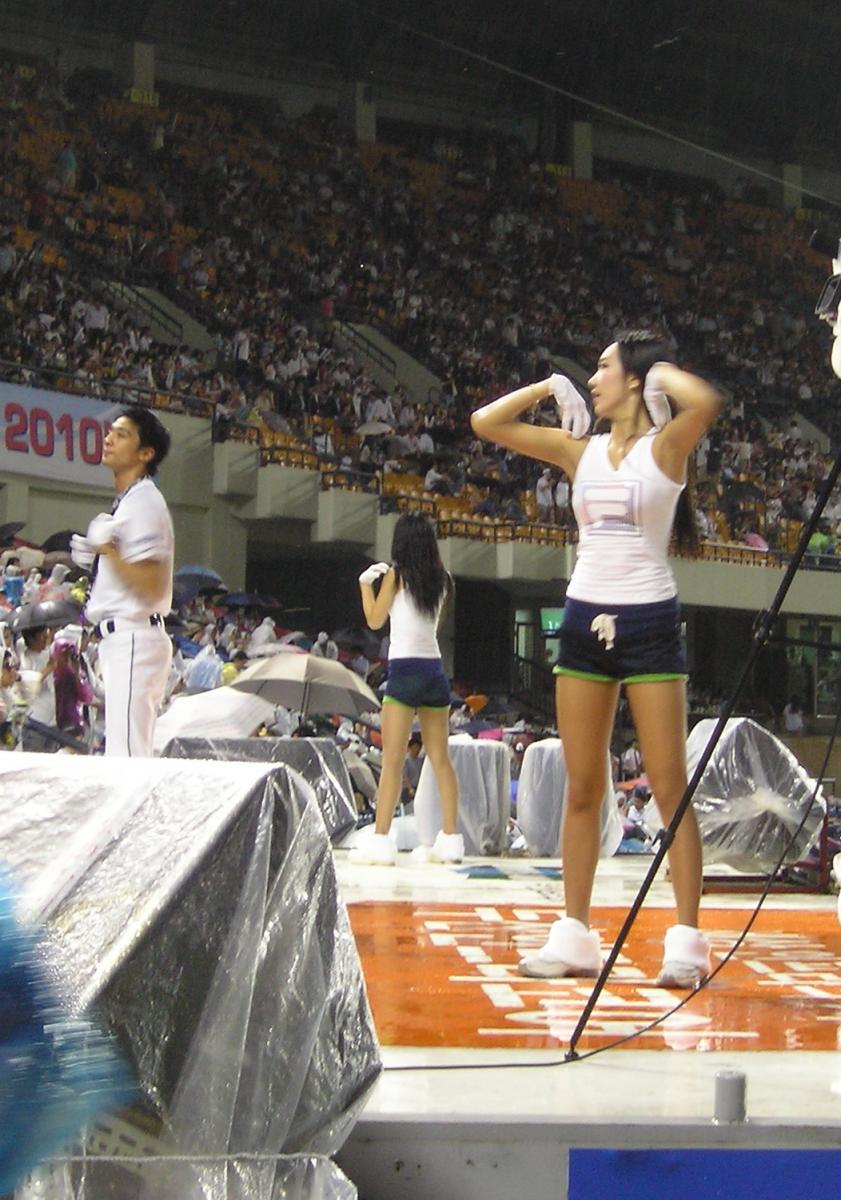 We got our 3,000 won beers (less than at most bars!) and BK whoppers just as a “discussion” had broken out on the field. Players, managers and umpires all milled about while the rain fell and the moppers mopped. The cheering continued, the drums pounded and we happily nodded our heads to the beat and tried to stay dry. 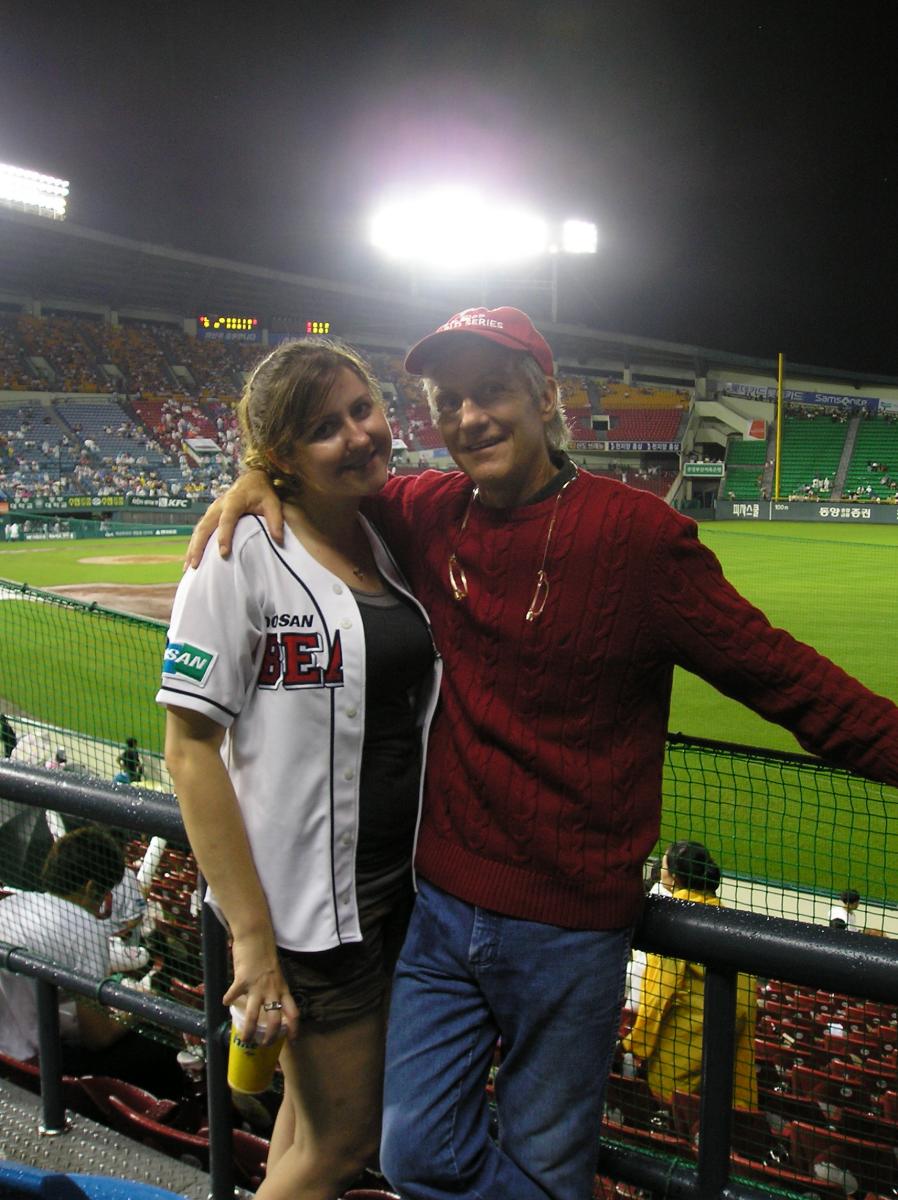 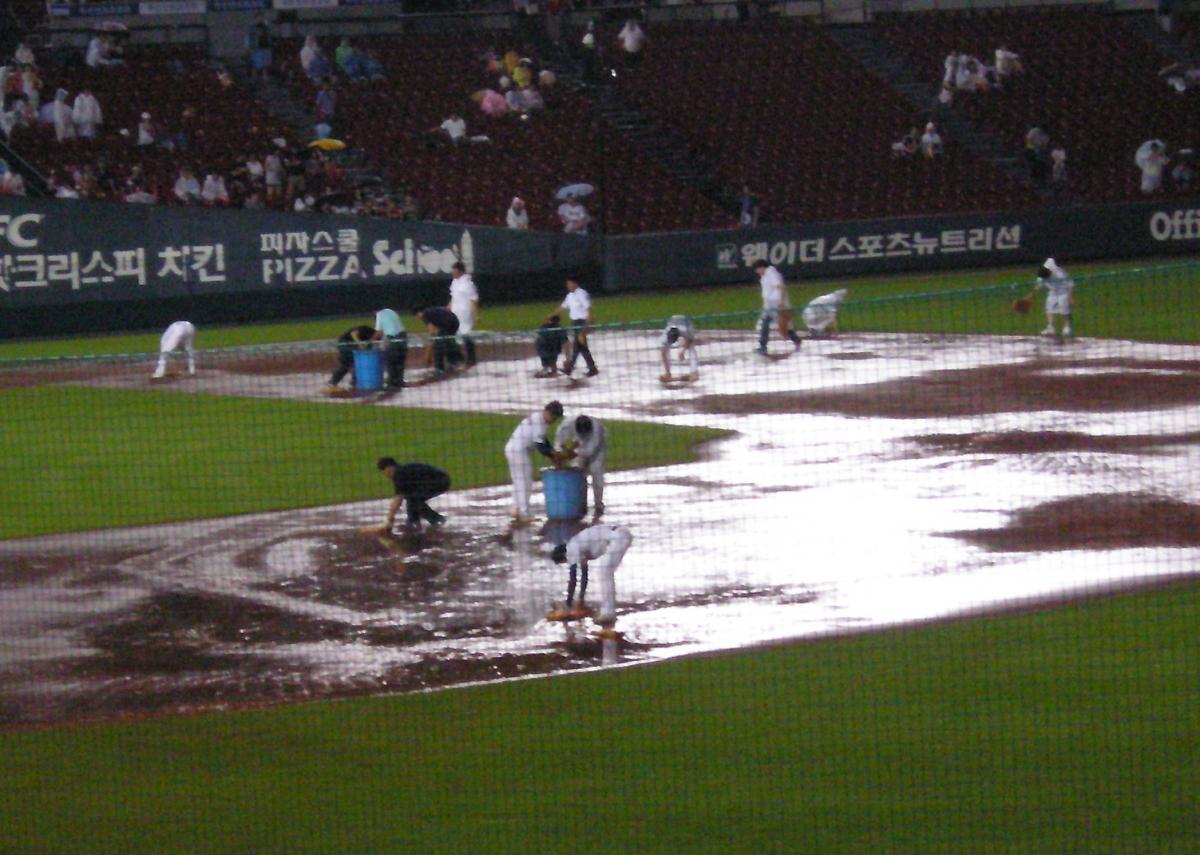 The longer the conference went on the harder it rained. Eventually the players left the field only to reappear  half an hour later, line up on the baseline in front of their respective dugouts and bow to the remaining fans. The game was over, a 2-2 tie. We went home happy and no one was disrespected.