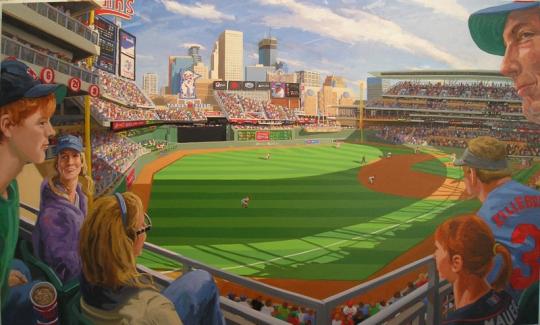 A lot of people were dubious when the Minnesota Twins announced plans to build a new, downtown, open air ballpark. The pneumatic Hubert H. Humphrey Metrodome is not beloved for it’s cozy architecture (it is still the home of the NFL’s Minnesota Vikings). It is, however, warm and dry 365 days a year, right downtown and has a rich history of franchise success being the home of the 1987 and 91 World Champions. 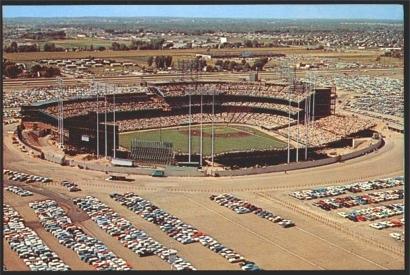 While the Twins remained competitive despite gradually declining attendance during the dome years, Minnesotans crave being outside during their beautiful, Scandinavianesque summers. Heading inside the dimly lit “Homer Dome” on a midsummer evening had become an unpleasant duty rather than an aesthetically rewarding experience. They fondly remembered Metropolitan Stadium. A onetime state of the art ballpark located in suburban Bloomington, it had been the Twins out of doors home for the first 21 years of franchise history. 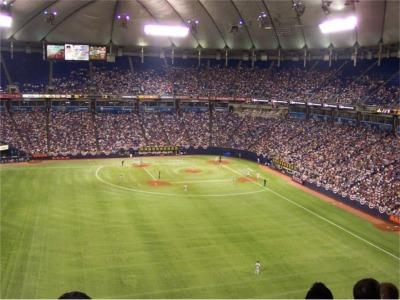 While there was solid agreement a downtown out of doors ballpark would be great, the question of who would pay for it was not.  So in 2000 the Pohlad family, owners of the team since 1984, embarked on a plan to convince the locals that tax money would be well spent if devoted to construction of a new, state of the art, downtown ballpark.  It took 6 years, but finally in 2006, upon threat of relocation, Hennepin County committed $350 million of funds and along with the $150 million contributed by the Pohlad family construction began. To glowing reviews Target Field opened 4 years later and fans were rewarded with, not only a beautiful new downtown ballpark, but a thrilling season and divisional championship.

Target Field has a very different feel than many of the new generation of ballparks. Like many it is right downtown, but the look and design do not harken back to the “golden age” of baseball. There are no light towers, a classic feature of the older generation. A dramatic wing containing the lights encircles the main seating bowl. There is lots of polished stainless steel and white maple in the detailing, along with yellow sandstone quarried from the nearby Mississippi River bluffs. Perhaps the most amazing thing about the park is how it is physically integrated into the dense urban fabric of the warehouse district in Minneapolis.  Subway/surface train lines run right up to the gates. Special parking lots and express trains run from outlying suburbs. Numerous restaurants and bars have sprung up around Target Field, and another Scandinavian invention, a Bicycle Bar makes it’s way through the crowded streets before and after games.

This, folks, is taking civilization to new, heretofore undreamed of heights!

My first game at Target Field was a family affair, which is reflected in the final painting. Much of my wife Zeeann’s family lives in the area and, with the exception of step brother Bill, it was their first visit to Target Field as well. Since the ballpark is so close to downtown one doesn’t have to get very high up to see the impressive Minneapolis skyline. It was a beautiful sunny afternoon with the shadows, in classic form, slowly creeping across the diamond.

In about the third inning, as I was sketching, the curved shadow of the large light fixture, a sort of fixed wing, made a perfect circle in perspective, an ellipse, on the field. Amid the jutting grandstands and jagged skyline was a circle of light and shadow with the outfielders crouching down as if the weight of the sky was a burden. I’m not sure I realized it at first, but this was a perfect moment because the shadow shape was a bulls-eye in perspective, a reference to the Target Corporation’s logo which is visible on a billboard above the right field bleachers. As I sketched it out on the canvas it also became clear it was a simple, powerful unifying visual element of the painting. 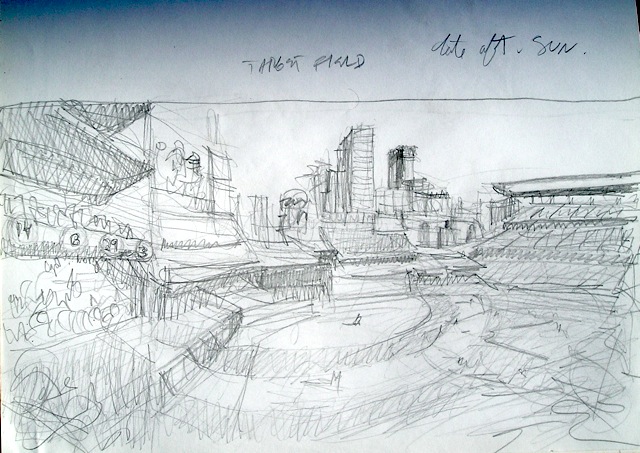 This early stages shot also shows another key reference I used. Stepbrother in law Bill Kuhn is an accomplished photographer and he created a panoramic shot from our seats later in the game when the sun was still illuminating downtown, but Target Field now in shadow. This, and other photos of our group were indispensible in painting the stadium details and foreground portraits. 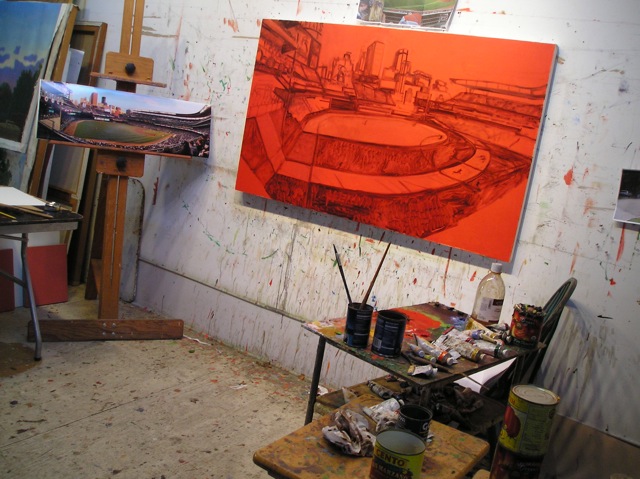 His was the first portrait I included, looming over all from the upper right corner.

Next were my nephew Jack Sand, and daughters Lucy and Margaret on the left side. If one can’t include ones loved ones in a project like this what the heck is the point? 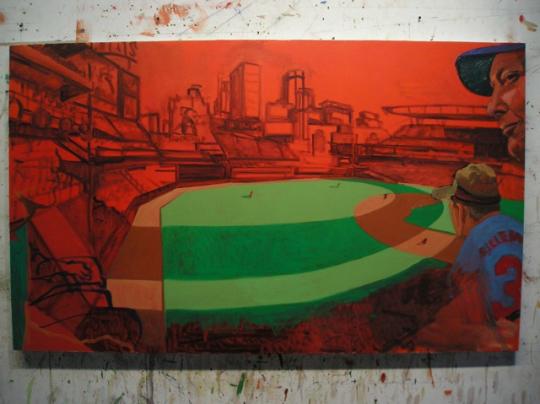 While the overall look of the painting was established, there was a lot of architecture, sky and figures to paint, to say nothing of the mow strips. 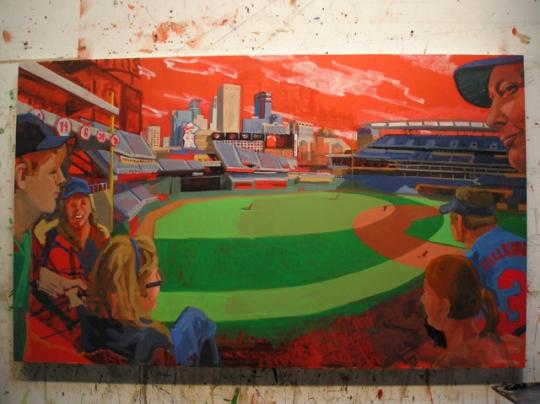 Weeks later, “Target Field, Home of the Minnesota Twins” was complete. It was wonderful to learn that on seeing it the Twins decided to purchase it, the first of the BallPark Project paintings to be purchased by an MLB franchise. 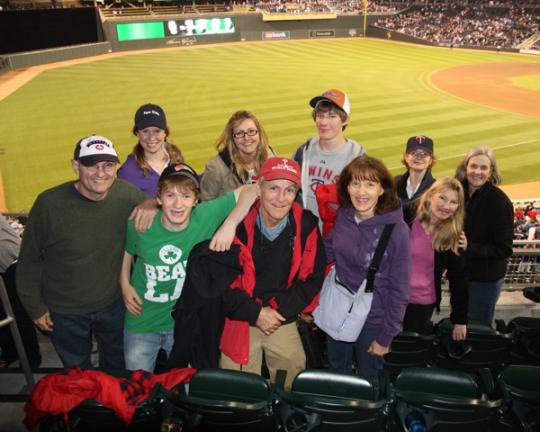 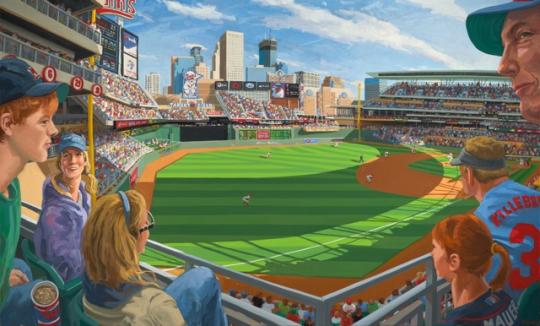