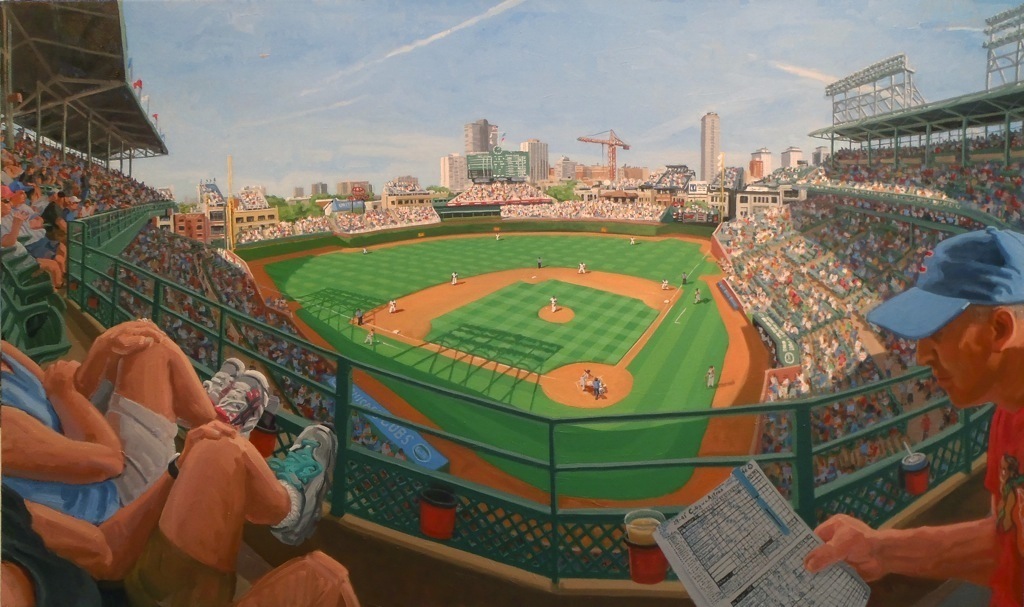 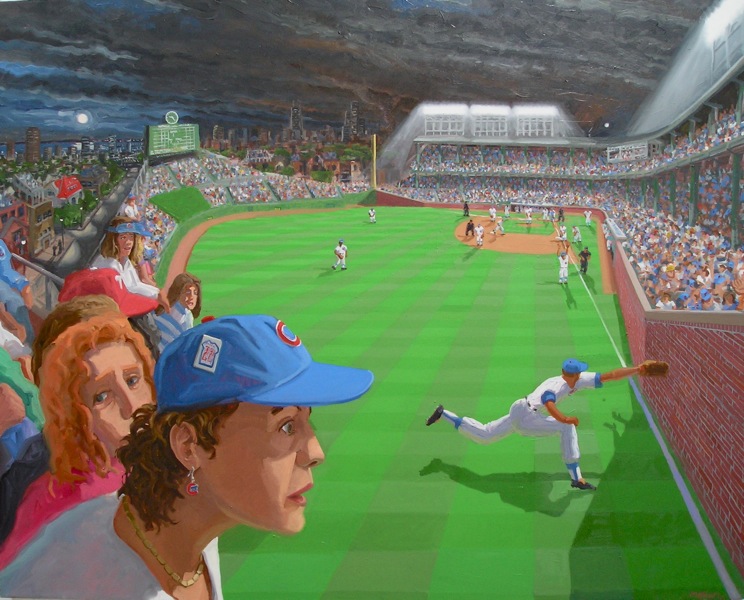 How is it that beauty and tragedy go together? In the baseball world (the hearts and minds of millions of us) tragedy is not an exaggeration when it comes to the travails of Chicago’s beloved Cubs and their Wrigley Field home. Most recently, and perhaps most famously, on the brink of victory in the National League Championship Series a true blue, devoted Cubs fan inadvertently interfered with a ball in play preventing a key out. The upstart, and let’s just say it, undeserving Florida Marlins went on to score eight unanswered runs and ended up winning the World Series a week later. The fan was hounded out of Wrigley, ultimately out of his home in Chicago suburbs and now lives in exile, if not the witness protection program despite sincere contrition and tearful apologies. No one was thinking how beautiful Wrigley is those dark days. But in the light of day those and other trauma fade and Wrigley resumes its place as the most beautiful of all Major League ballparks. And not beauty of the skin-deep variety. It is the beauty of age and tradition as well as proportion and place. It is the richness of history, the community of neighborhood and sanctity of light. While none dispute it’s aesthetic richness the hard fact remains, it is doubtful there is a soul alive who witnessed the last Cubs World Series victory in 1908. Since Wrigley didn’t open its doors till 1914 that makes the “Friendly Confines”, as it is called, a big 0 for 100.

But let us not dwell on the negative. Wrigley Field is beloved and glorious. Many of the millions of fans that make their way to Wrigleyville are making pilgrimages from around the world to experience the history, intimacy, and beauty of major league baseball being played in the most unaltered and original ball park in the league. When Woody Allen said, “I love baseball. It doesn’t have to mean anything, it’s just very beautiful to watch” he was talking about watching a game at Wrigley. Even the houses across the streets surrounding the ivy covered brick outfield walls are topped with makeshift stands and have become thriving businesses in their own right. Poachers for sure, they add to the ambiance of a place out of time, an organic, lively, somewhat makeshift world where the regular rules don’t apply. No one planned or organized all this. It just happened and that’s why we love it so.

There are, however, bitter Cubs fans, young and old who bemoan and curse their “bad luck”. Astonishingly, to me at least, many if not most die-hard Cubs fans were bitter and angry about the cross town White Sox World Series victory in 2006. “Why not us?” came the plaintive cry from the Cubs faithful. Brothers and sisters, isn’t there enough civic pride and baseball love in your hearts to enjoy your neighbors success? Alas, it seems the mantle of failure is heavy and leaves no room for magnanimity. Still, every spring, summer and early fall the faithful congregate at Addison and Clark, fill the Cubbie Bear Bar and Murphy’s Bleachers tavern, and along with pilgrims from afar fill the stands, ever hopeful in March and April but resigned to another season of disappointment by the middle of summer.

When great old friend and college cross country bike trip companion Bruce Tranen called to commission a BallPark Project painting of Wrigley Field, I was thrilled. Many years earlier, before the lights were added in 1988, he had taken me to my first game at Wrigley and had even bought and sent me a flag that had flown from the famous hand operated center field scoreboard. He had the perfect spot in his empty nester Lake Shore Drive condo all staked out- right above four old Wrigley Field seats. It’s almost possible to sit in one of the seats and see the actual Wrigley out a back window. That is his wife Jan in the painting “Dark and Storm Night in Wrigley” gasping at the horror about to unfold with Steve Bartman reaching out to deflect the foul fly Moises Alou is poised to catch, thereby allowing the Florida Marlins to rally and thwart the Cubs championship hopes yet again. That was a painting too full of painful memories for them to consider owning. So a different kind of Wrigley Field painting was needed. If ever there was a perfect spot for a BallPark project painting, this was it.

Bruce’s tickets are front row of the upper deck behind home plate, so it was easy to figure out the vantage point of the painting. The happy Bruce painted in the early going was from a photo taken on one of our spring training jaunts. There is nowhere he seems happier to me than in a ballpark on a beautiful day. Heck, the day doesn’t have to be beautiful, so it seemed appropriate.

Then it occurred to me to make a “bike trip family portrait”, including the wives.

The Chicago Blackhawks were in the Stanley Cup Finals when we went and the crowd was dotted with bright red Blackhawk tees. All that red is an unusual sight in Wrigley, but the color addition was lively and with Bruce wearing one the lower right corner of the painting was nicely locked in. As I wrestled with the scale and placement of the figures I realized the painting was becoming more about the six of us, and not so much Wrigley Field. As hard as it is to paint out weeks (months?) of work, it had to be done if the painting was to be fundamentally about Wrigley. Simplifying and paring down was actually a relief as I was running into problem after problem with all the demands of fitting 5-6 portraits in a natural way into a painting that also captures the essence of Wrigley Field.

One thing that was never in question was the fact that Bruce was going to be in the painting and keeping score. That also allowed for the history of an actual game to be recorded in the painting, which is kind of nice as he is an inveterate record keeper and it expresses an essential aspect of his personality.

It was like old times once I got to painting the ballpark itself. The only problem area was the lower left. Those are the legs of my wife Zee and Jan, wearing what used to be called “sneakers”.

At first the garish colors seemed too much, but on second thought I figured they are a sign of the times, certain to look dated in years to come. That is one of the great things about Wrigley. The fashions come and go and the Wrigley Field stays the same. So this, like all the generations and styles before it, will seem awkward and strange in a few years, then nostalgic, then slightly incomprehensible, as we view the old photos of stands filled with men in suits virtually all wearing straw hats. And hopefully, in the not too distant future all the sturm, drang, and angst about the Cubs lack of a World Championship will be an old, distant memory as it does for Red Sox fans who wore that same mantle of fatalistic doom before their recent triumphs. But until then, the curse or the billy goat lives on.

2022 Addendum- Originally written in 2014, the curse was lifted in 2016 when the Cubbies did indeed win the World Series. One suspects a new dry spell has begun as the victorious squad of ’16 was totally dismantled at the end of the 2021 season. It seems to happen to the best teams these days and one wonders if dynasties are even possible in today’s world of salary caps and trading deadline deals. As with all things, time will tell!