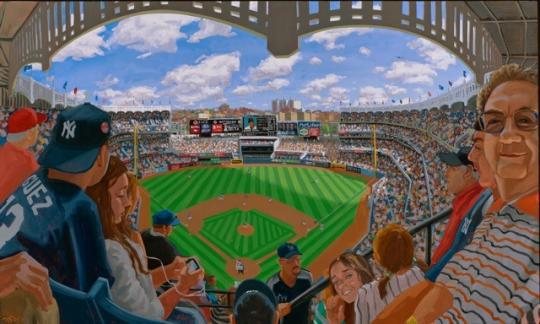 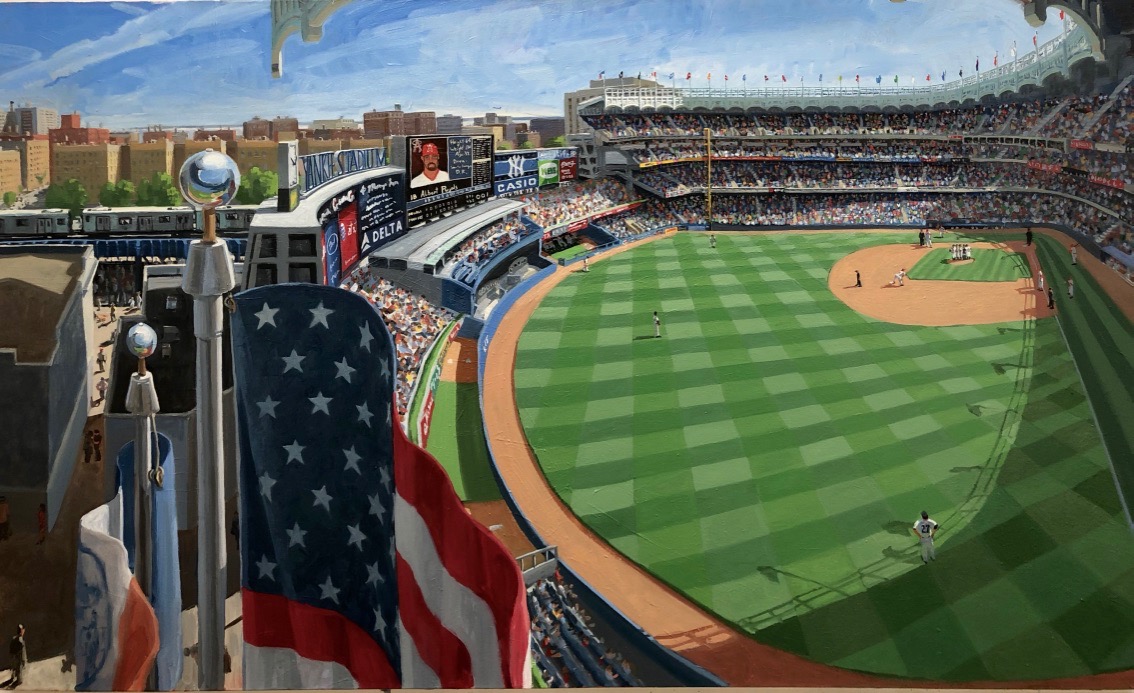 As a kid I visited my grandparents in suburban St. Louis every July.  Gloriously free and grown up, I roamed about basically unsupervised day after hot, humid day.  After doing a chore or two I’d head to the drug store in town and buy as many packs of baseball bubble gum cards as I could. Cramming the cardboard like gum into my mouth, I walked home studying the new acquisitions. Since the company that made the cards, Topps Chewing Gum, Inc, was based in New York City the background of many cards was Yankee Stadium. Their photographers basically used two views- looking out toward right center field with the Bronx borough court house looming behind the scoreboard, or down the left field line with the façade topped upper deck curling around the upper half of the composition. The vertical drama and urban oasis quality of “The House That Ruth Built” imprinted itself on my mind as I headed back up the hill to Grandma and Pappy’s house. Even though I was from outside Boston, went to St. Louis in the summer, Yankee Stadium was an important part of my visual world.

I never got to see original Yankee Stadium in person. In 1975 George Steinbrenner oversaw a renovation that took out the iconic façade and got rid of the beams that had been obstructing views for 50 years. Over the next roughly 30 years the “new” Stadium came to embody a kind of dread as year after year Red Sox drives into the death valley of the left center power alley were tracked down by Yankee left fielders, drives that would have been off or over Fenway Park’s Green Monster. While Reggie Jackson presided over yet another Yankee dynasty, my hometown Red Sox and their fans were overwhelmed with a sense of hopelessness and defeatism which lasted for decades. When I attended game 2 of the 2004 ALCS, the “Who’s Your Daddy” game, little did I know everything was about to change. We were cursed at and spit upon while squeezing our way down the narrow cattle shoots called ramps after the loss. But this was the proverbial “darkest hour before the dawn” as the Sox staged a historic come back, eventually defeating the Yankees in that series and then sweeping the St. Louis Cardinals to win their first World Series since Harry Frazee sold Babe Ruth to the Yankees in 1919. The “curse of the bambino” was no more! “Hell Freezes Over” was the headline of the New York Daily News the morning after the Yankees loss and I celebrated by painting the most surrealistic painting I have ever painted. It was of Yankee Stadium from where our seats were in game 2, but depicted the Red Sox Johnny Damon’s grand slam home run in game 7, the Bronx borough courthouse surrounded by a city in flames, and a lowering sky of ice- yes, hell freezing over. 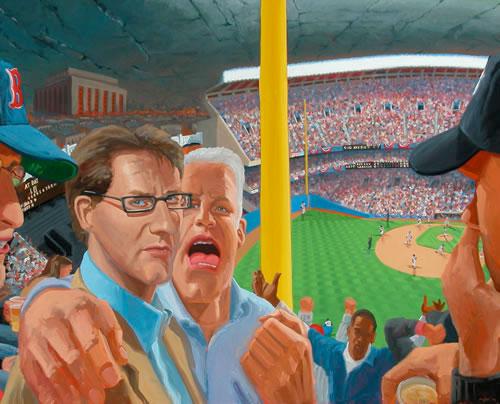 Though filled with painful Yankee Stadium memories, I was horrified when Steinbrenner announced plans to build a new Yankee Stadium right next to the old “new” one in 2005. How could the turf that Babe Ruth, Lou Gehrig and Joe DiMaggio played ball on be abandoned? With it’s own cable network providing the Yankees with by far the most income of any franchise, how much more money did they need? Well, plenty more apparently. A new Yankee Stadium was built and opened in 2009. Wouldn’t you know it, far from being cursed, the Yankees beat the Phillies to win their 28th championship in the new Stadiums’ first season.

My first trip to new Yankee Stadium was the result of a commission from a long time Yankee fan. It was a beautiful early season day game and we had excellent seats behind first base, an expensive proposition. I did my usual tour of all corners of the new ballpark, sketching and taking pictures the whole time. The most noticeable and dramatic change was a recreation of the façade from the original “House That Ruth Built”. It was clean and easy to walk around, a vast improvement over the tiny aisles and poor concession areas of the earlier Stadium. The views from the upper corners were fantastic and the seats were filled with a diverse mix of rabid, A-Rod chanting Yankee fans. Since seats near home plate can go for upwards of a thousand dollars or more (for ONE game!), non Wall Street employed fans are limited to these longer views, but they are good ones and after an original hullabaloo, I’ve heard no complaints from the Yankee faithful about the cost of going to a game.  The Yankees beat the Blue Jays, of course, and everyone left happy. As beautiful and well designed as the Stadium is, however, it is still in the Bronx. It took two hours to get to the George Washington Bridge, a mile or so distant, on our return to Philadelphia. Some things can’t be designed away.

The original commission was to be a painting of Yankee Stadium in the BallPark project format and something of a family portrait as well. I was interested to learn the future owner has three seats from old Yankee Stadium in his “man cave”, and the painting would hang just above them. After looking at all my sketches and photographs we decided on a view high above home plate because it emphasized the storied façade and the way it wraps around the seating bowl, a reference to the original Yankee Stadium. It is a classic border separating the building from the sky and gives an almost sacred quality, a Parthenon like frieze, underneath which a beautiful spectacle is presented to thousands of baseball fans. There was room on both sides for the portraits and the enveloping façade seemed to include the actual seats underneath the painting.

At some point in the process it was decided to depict an actual moment in Yankee history, Derek Jeter’s 3,000th hit.  Since the players and game action are among the last things to paint, I didn’t think about how realistic to make the action on the field until the later stages. And how would I do that anyway since I wasn’t there? I knew it was a day game so the blue sky I had sketched in made a kind of sense, but what kind of day was it? If we’re showing an actual event, how close do we make it? I often take liberties in this regard, “Hell Freezes Over” being the most dramatic example. In this case I decided to get it as close as possible. While network television shows only the telescopic view from behind the pitcher looking in toward home plate, YouTube had videos posted from all over the Stadium. I had my pick of where to watch the magic moment from and I eventually found a video from the upper deck behind home plate. Thank you unnamed and un-credited Yankee fan! It was a gorgeous summer day, fluffy clouds blowing by, the field bathed in light, followed shortly by the shadow of a passing cloud. When Jeter got the hit, a home run, he was in shadow, but the outfield was just emerging into light. It was a beautiful moment and fit in perfectly with the composition.